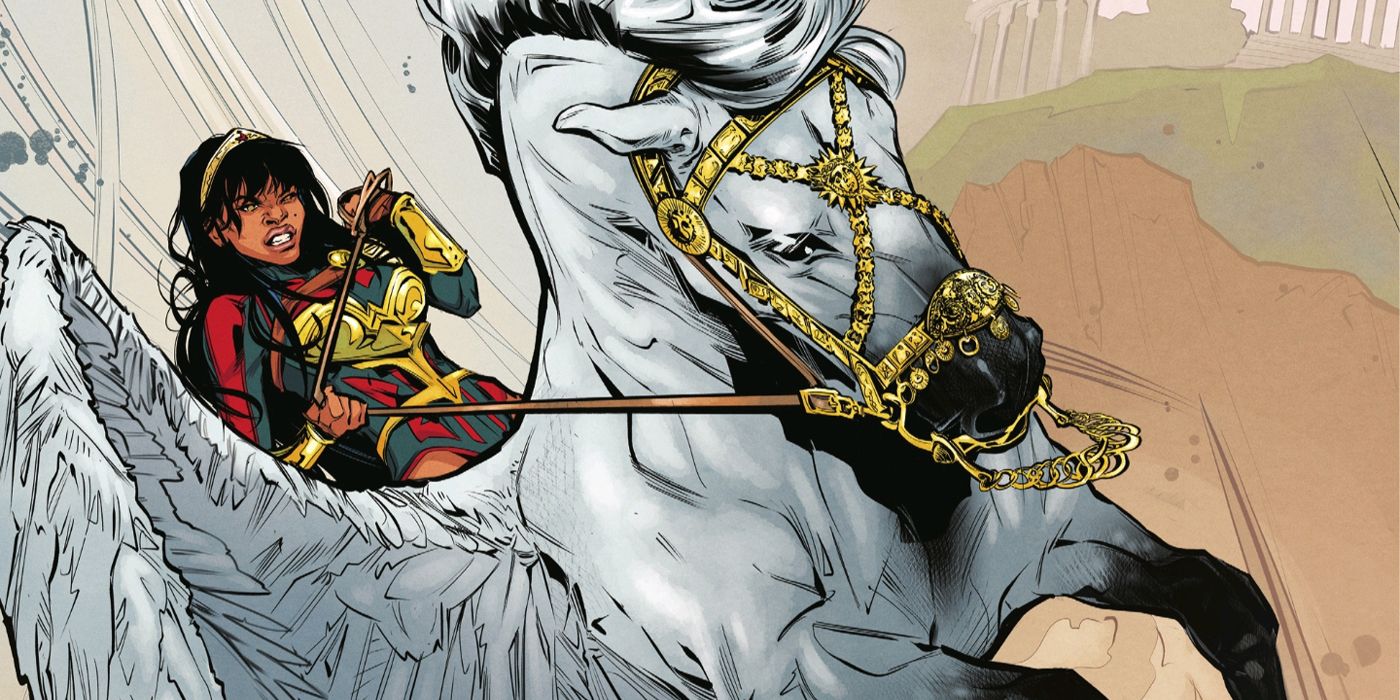 DC readers met Yara Flor and learned of her origin, but now they learn the story of her fellow pegasus, Jerry, in Wonder Girl 2022 Annual #1.

Wonder GirlThe annual issue shows that even Yara Flor’s place of trust has an origin story within the DC Universe.

A preview for writers Joëlle Jones and Douglas Marques’ Wonder Girl 2022 Annual #1 tells the story of Jerry, Yara’s pegasus whom she met while training with the gods of Olympus. Although Jerry makes his debut in Future State: Wonder Woman #1 from January 2021 and an alternate DC timeline, he first encounters Yara in the main DC continuity in the pages of Wonder Girl #4. The preview for the upcoming annual issue portrays Jerry as a creature in search of adventure, but his dreams of soaring turned him into an outcast one tragic day.

According to the issue’s narration, Jerry “didn’t much care for the doldrums of preening in the sun all day” like the rest of his kind, but “preferred the thrill of flying”. The pegasus would hone its aerial skills by maneuvering through thunderstorms conjured up by Zeus, the Greek god of thunder and lightning. However, Jerry’s daring exploits inspired a young Pegasus unable to replicate his talents.

Shown by the preview, one day Zeus decided to cause “the most devastating storm mankind will see this side of the century”, although that didn’t deter Jerry from his usual showmanship. Unfortunately, the young pegasus decided to follow Jerry into the dark clouds, and while the experienced aviator did well, the youngster was caught by Zeus’ lightning and fell to the ground dead. This caused the other pegasi to turn their backs on Jerry, leaving him to travel alone until he met Yara.

As for Yara, she was presented as the Wonder Woman of the future state timeline and member of DC Universe’s alternate Justice League. In the main DC continuity, she was officially given the title “Wonder Girl” and a new tiara by Wonder Woman Diana Prince at the end of the Trial of the Amazons event, taking the title alongside Wonder Girls Donna Troy and Cassie Sandsmark. The Dark Crisis on Infinite Earths event writer Joshua Williamson and artist Daniel Sampere announced that Yara would be part of a legacy trinity band for DC Comics, replacing Superman Clark Kent, Batman Bruce Wayne, and Diana with Jon Kent, Jace Fox, and Yara.

Wonder Girl 2022 Annual #1 is written by Jones and Marques with art by Emi Lenox, Adriana Melo, Sweeney Boo, and Ben Dewey, color by Jordie Bellaire, and lettering by Pat Brosseau. The issue’s main cover is by Jones, with variant cover illustrations contributed by Chirs Wildgoose and W. Scott Forbes. The issue goes on sale August 30 from DC Comics.