Walks in the most beautiful regions of New Zealand 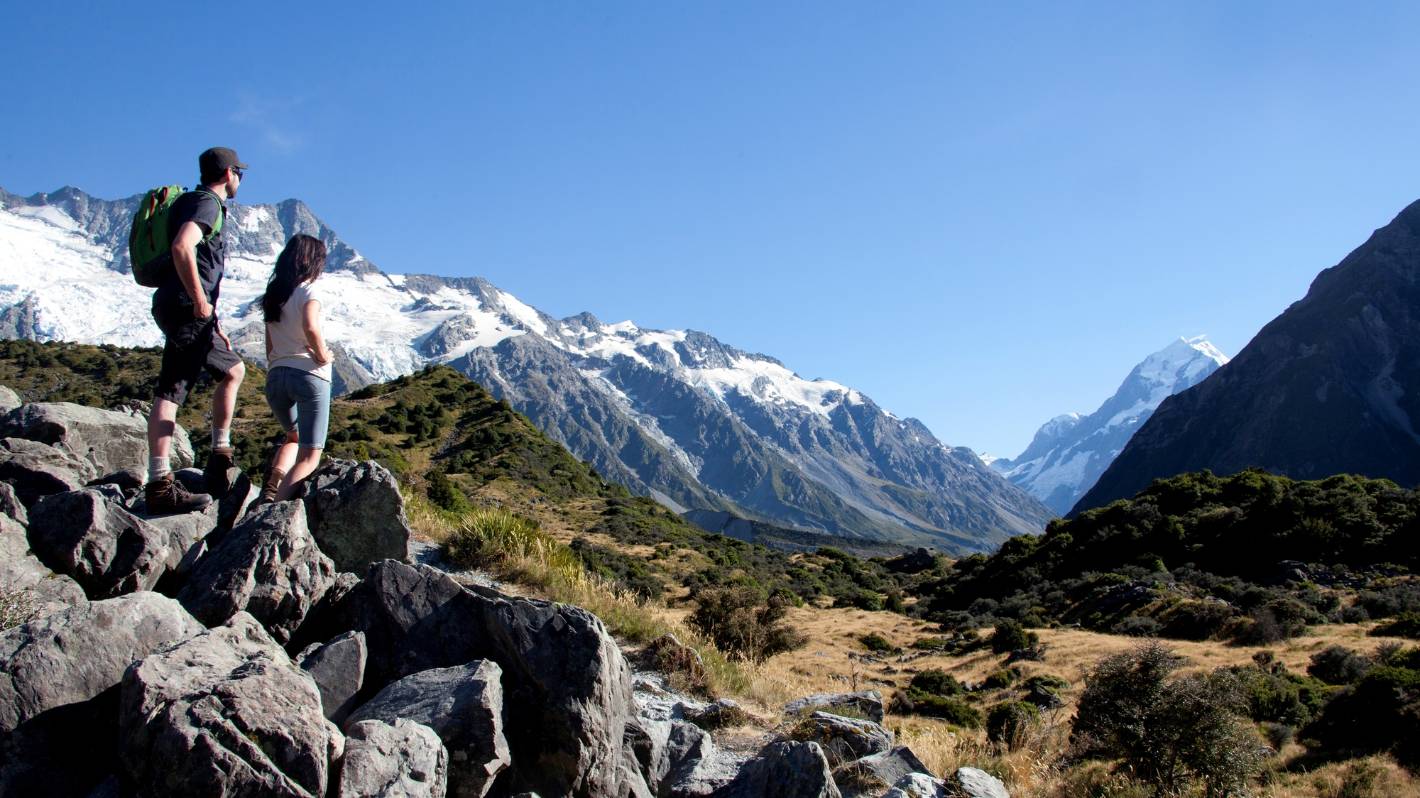 It can be easy to forget when you’re stuck in a suburb or settled in a suburb, but New Zealand is a supermodel of a nation – so blessed in the looks department that before pandemic millions of people endure each year. hours in a flying sardine can just take a good look at it.

Some of our most spectacular sites are inaccessible by road, making their visit a bipedal adventure through terrain that looks like something a the Lord of the Rings movie (in many cases because it is). The Great Walks are a great place to start, but you don’t have to embark on a multi-day hike to discover worthy sites around the world.

The eight walks below take you to some of New Zealand’s best views over terrain as diverse as bush beaches, snow-capped mountain ranges, hidden valleys, and geothermal wonders. Prepare to have to sort through thousands of photos.

Walk in the Hooker Valley

See New Zealand’s highest peak reflected in an iceberg-strewn lake on a 10-km round-trip hike through the sacred Tōpuni region of the Hooker Valley.

READ MORE:
* Five of the best walks in and around Queenstown
* Take a Hike: Five of Northland’s Best Hikes
* The hidden alternative to the Tongariro Alpine Crossing which is a relative breeze

Aoraki / Mount Cook is the physical embodiment of Ngāi Tahu’s most sacred ancestors, and you know you are in a special place the moment you set out on the trail surrounded by the Southern Alps.

Hear the roar of distant avalanches as you cross the three swing bridges and keep your eyes peeled for kea and wildflowers such as the world’s largest buttercup, kōpukupuku.

Go before sunrise for an even more magical scene. You couldn’t start the morning better by watching the great fireball in the sky projecting its rays at an earth-bound god.

Getting a front view of Taranaki Maunga admiring its beautiful reflection in an alpine tarn is the highlight of this short alternative to the two to three day Pouākai tour.

Departing from the Egmont National Park Visitor Center, you’ll pass under towering lava columns, the terrestrial scar that is the Boomerang Slip, and a blood-red stream before arriving at Holly Hut, from where you can take a 1-hour round trip to one of the park’s most impressive waterfalls.

Then you will pass through a swamp home to species not found anywhere else on earth and the golden tufts of the Pouākai Plateau before arriving at Pouākai Tarns with its famous reflections of New Zealand’s response to Mount Fuji . A path through the trees draped in moss and lichen of the “Goblin Valley” will lead you to the end of the trail.

You don’t have to be a die-hard hiker or take a helicopter ride to soak up the scenery of a secluded alpine lake – just follow the 3.1 km round-trip Lake Marian trail in Fiordland National Park.

Starting about 1 mile on Hollyford Road, you’ll cross a suspension bridge and a series of spectacular waterfalls before climbing through the forest to a hanging valley home to one of the most beautiful lakes in, if not Nova Scotia, the National Park. -Zeeland. Reflecting the mountains that surround it on a clear day, this is what Tourism New Zealand’s 100% Pure campaigns are all about.

Get a bird’s-eye view of Franz Josef Glacier without an environmentally unfriendly helicopter ride on this 11- to 12.3-mile round-trip trail through Westland Tai Poutini National Park.

Four photogenic swing bridges, a staircase over what looks like a fairytale forest and more waterfalls than you can stick a walking stick into will keep you entertained as you make your way up Waiho Valley (Franz Glacier Josef), over ice-carved rocks and through open scrubland to Roberts Point. From there, you’ll be able to cram the glacier, waterfalls, sheer cliffs, and mountain peaks in one panoramic shot.

Standing atop the eponymous Duke’s Snoz, it’s easy to imagine looking out over Vietnam’s Halong Bay: Whangaroa Harbor is a labyrinth of steep volcanic cliffs and shrub-covered hills descending to only accessible turquoise bays. walkers, canoeists and kayakers.

If you don’t have water transport to Lane Cove, you’ll need to follow the 5.6 km Wairākau Stream Track from Tōtara North, which climbs an old farm road before descending through regenerating forest to the eponymous stream – a good place for swimming in the summer. After crossing it a few times, you’ll find yourself in a valley that seems like it hasn’t changed since moa traveled the country.

You’ll get a tantalizing glimpse of bush-backed bays where yachts often anchor for the day as you make your way to Lane Cove with its naturally popular DOC Hut. The calm pebble beach is the best place on the track for swimming.

From there, things get a bit gnarly. The Duke’s Nose Track is short at 750 meters, but very steep. You will need to be able to use grab bars to pull yourself up onto the almost vertical rock face that makes up the last 50 meters. Your reward: feeling like you’ve traveled Southeast Asia on your own two legs.

Social media star, this 10 mile return trail attracted so many hikers before the pandemic that they had to queue for the highly repeated shot of standing with outstretched arms at the viewpoint.

But it was worth it. The hike to the viewpoint is a difficult task with its relentlessly steep switchbacks but, standing at the top, you feel like you have Godzone at your feet: the steel blue Lake Wānaka stretching out towards a Lost world– esque mountain landscape. Turn right and you will have a bird’s eye view of Wānaka. Turn left and you look out over a bay with white beaches leading to a seemingly hidden valley.

And the track continues to give. From the point of view, it’s another half an hour of steady climb to the top of 1578 meters, from where you can see even more this particularly sublime corner of paradise. Do it before the borders reopen and the conga aligns reforms.

Passing the Red Crater, the perfect cone of (Mt Doom) Mt Nguaruhoe on your shoulder, hikers come across an even more surreal site: that of three pools of hyper blue-green water tumbling down a steaming volcano.

Often touted as the best day hike in New Zealand, the 19.4km one-way crossing will make you feel like a main character in a Tolkien novel (in part because Tongrario played Mordor in the the Lord of the Rings film trilogy). Passing through a double UNESCO World Heritage Site, the crossing passes through glacial valleys, smoking chimneys, ancient lava flows and colorful alpine flora.

You have to work for it though. The climb to the 1886 meter high Red Crater is a puzzle and the descent to the Emerald Lakes (Ngā Rotopounamu) is a journey (literally if you slide down the steep slope of the scree). Be prepared for high winds, freezing temperatures and snow even in summer. Get it on a good day, and the view (as well as the climb) will take your breath away.

The 360 ​​degree views from the top of Te Whara / Bream Head just might inspire you to do a Leonard Dicaprio in Titanic and yell “I’m the King of the World!”.

Following an old Maori trail from Ocean Beach to Urquhart Bay, the 7.5 mile trail is so steep in places that even the adjustment should take five to six hours to complete. But the views and secluded bays along the way more than make up for the scorching buttocks and thighs.

Reaching the ridge line after climbing up from Ocean Beach, the trail veers left toward the rocky summit. The view is breathtaking even at the base of the rock, stretching to Cape Brett in the north and Tawharanui in the south. Climb the almost vertical rock at your own risk – there are no chains, ramps or barriers and a fall could be catastrophic.

The trail continues through some of the most impressive coastal forests you’ll find on the North Island, plunging down to Peach Cove bordered by pohutukawa and Smugglers Bay, an island in the Pacific. Rinse your sweat off in the clear blue water (or at least soak your sore feet) before the last short stretch through grassy fields to Urquhart Bay. Ideally, you will have a car waiting for you here. Otherwise, get ready for the 5 mile walk along the way back to Ocean Beach.

A twelve-part novel by Annie Zaidi I An excerpt