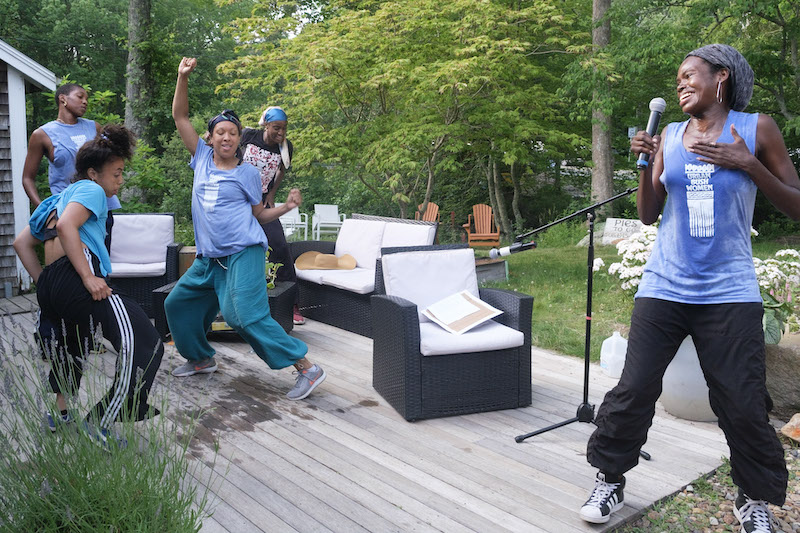 The Orange Peel Bakery in Aquinnah is not a traditional dance space. Yet last Friday, Brooklyn-based dance troupe Urban Bush Women transformed the landscape surrounding the kitchen and farmhouse into a stage for a work in progress titled Haint Blu, which will be presented for two weeks next summer in collaboration with The Yard.

The performance piece transforms folk myths and intergenerational stories brought together by members of the Urban Bush Women Company, all Black women, into an hour-long blend of dance, music, movement and spirituality. The show also incorporates stories and folklore that the band discovers wherever they perform – Friday’s show frequently referenced stories of Wampanoag and Black tied to Martha’s Vineyard through oral tradition.

More than 75 guests gathered on the grass and gravel around Orange Peel for the show, which was followed by drinks and dinner of flatbread, baked over a stone fire in the outdoor oven at the bakery.

The music was a big part of the performance. — Mark Alan Lovewell

The show started without chairs or a stage. Instead, the troupe, resting on a patio, moved quietly as co-composer Grace Galu picked up a witty tune on guitar. Throughout the evening, dancers moved through the audience and the landscape, weaving between guests like silent, rhythmic missionaries, or beckoning guests into a series of new spaces. The scene included armchairs by the fire, backyard pavilions and simple grass dappled by the long night shadow of the oak trees.

A sense of constant movement is at the heart of Haint Blu, Urban Bush Women’s production manager Jonathan Secor told the Gazette. The show incorporates folk songs and spoken poetry, but the emphasis is on the movement of the dancers, which translates oral tradition into a new physical language, Secor explained. 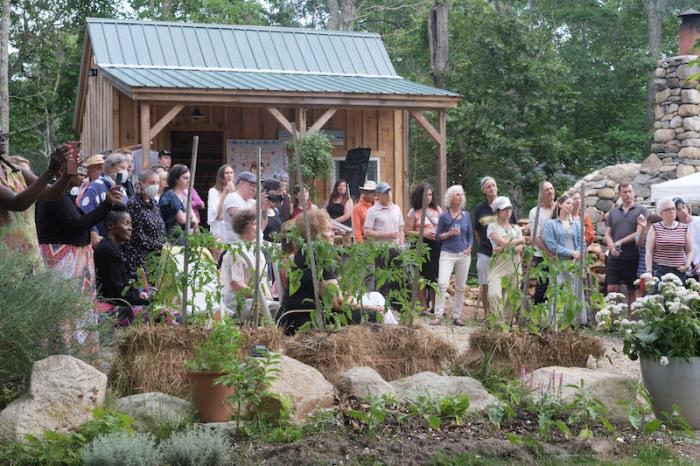 The show’s title, Haint Blu, refers to a paint color with spiritual significance to many black communities in the southern United States. The light indigo hue, traditionally used to paint porch ceilings, is believed to dispel dark spirits, according to society member Mikaila Ware. This nod to tradition and spirituality served as the starting point for the band’s journey into the stories and traditions of their families and the communities in which they will perform, Ms Ware said.

Live music was also featured, from simple beats on Pangi’s seed shakers to folk songs (and even minstrel songs) reimagined in a spiritual new mode. Ms Galu, the production’s co-composer, told the Gazette that she wanted the reimagined music to feel “almost like a dream – like deja vu”.

Shares, not projections, he specifies.

“We really want to hear from people, to be in dialogue with the community itself,” Secor said. 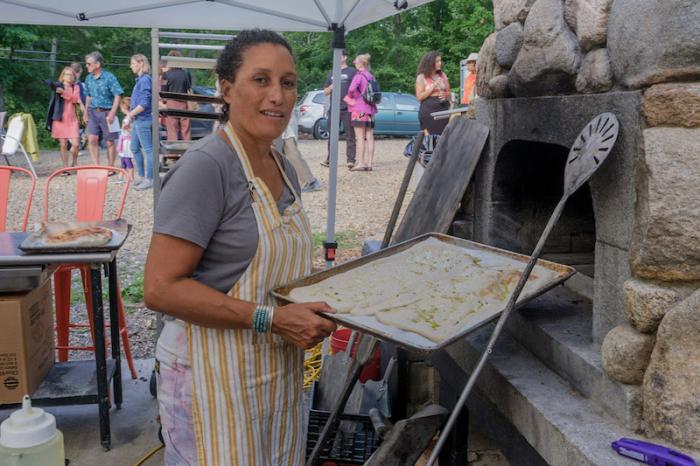 Sharing the show with the island community ahead of the official debut next summer will help garner new stories and adjust the performance to the island’s landscape and community, he added.

After the show, company members and crew joined the audience for dinner, with food and drink and conversation continuing long after the sun went down.

Haint Blu will return to the Vineyard next August, when they perform at Temple Baptist Park in Oak Bluffs, the Aquinnah Cultural Center, and again at the Orange Peel Bakery in Aquinnah, all venues connected to the island’s Black and Wampanoag communities. The show will be run as a two-night event, with one part shown down island and the next up island the following night.

For more information on the full summer season at The Yard, visit dancetheyard.org.