The March of the Machine, Quintorius in the Lost Caverns of Ixalan, and More • MTG Arena Zone 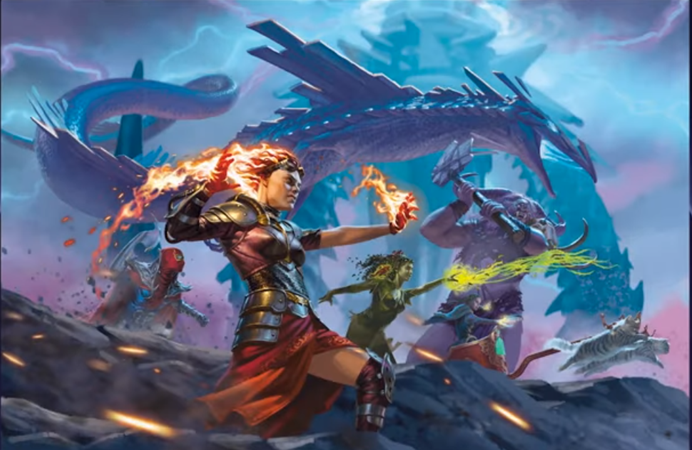 It’s no secret that when it comes to Magic’s antagonists, the Phyrexians generally rank at the top for most fans. So, the upcoming story that kicks off with Dominaria United and ends with March of the Machine, centering on the war against the Phyrexians, is sure to grab the attention of many players.

We have seen the Phyrexians leaving New Phyrexia and, so far, arriving on Kaldheim, Kamigawa, New Capenna and now Dominaria.

We also saw two planeswalkers, Ajani, Sleeper Agent and Tamiyo, Compleated Sage, fall to the hands of the Phyrexians and become compleated. The threat Phyrexia poses to the multiverse has never been greater, so what can happen next, and where does this all lead?

I’ll start with my theory, then break it down: the war against New Phyrexia will end with the ability for non-Planeswalkers to visit planes other than their own. I’ve seen some people mention it online as a possibility, and some have even found clues in the promotional art shown at Wizards Presents (which I’ll get to shortly), so this theory isn’t solely mine.

That said, I will delve into this both from a narrative perspective and, more importantly, from a business perspective. I believe this change comes specifically due to Commander’s rise in popularity and the company’s attempts to appeal more to that crowd.

Let’s talk about the evidence first. Two preview images were shown for the set during the Wizards Presents event, and they accompany this paragraph. The first features Teferi and Elesh Norn, along with what look like monstrous vines, with three different planes (Theros, Zendikar, and Kamigawa). The second image features Chandra alongside several non-planeswalker characters from different planes: Baral, Dina, Borborygmos, Esika, and Kairi. Normally, these characters and worlds couldn’t interact under normal Magic rules, which means something is different now. Somehow, March of the Machine changed the rules of the multiverse, and I think monster vines are key.

Kaldheim’s story ended with Vorinclex badly injuring Esika and stealing sap from the World Tree before returning to New Phyrexia. It should be noted that The World Tree on Kaldheim connected ten different “realms”, which were mini-planes, allowing the inhabitants to interact and fight against each other. The Phyrexians, of course, want to conquer the Multiverse. This is their only objective. Thus, we can conclude that March of the Machine revolves around them trying to achieve their goal. I believe the vine-like things seen in both promo art are the result of their efforts on Kaldheim: A Phyrexian World Tree. Part organic, part machine, it is the walking machine, so to speak, expanding into the multiverse, directly connecting all planes so that non-Planeswalkers can travel between them.

From a story perspective, this makes a lot of sense. Phyrexia wanting to connect the multiverse so they can invade any given plane at any time is a logical goal for them as an evil force. The question we should be asking is what does this “new normal” accomplish for Wizards from a narrative and a business standpoint? The answer to that is, of course, centered around the Commander format, which has become the dominant paper format in gaming, for better and for worse.

One of the many complaints that have popped up online about Magic’s story is that a certain sector of the player base actively dislikes Planeswalkers as main characters. They would prefer a throwback to the “old days”, with the Weatherlight crew being able to travel the Blind Eternities and explore various aircraft. This also connects to Commander, in which the games and, arguably, the “stories” center around Commanders, who are nearly all legendary creatures. Suddenly, with the planes connected by this Phyrexian world tree, we could see legendary characters appear in entirely new settings.

Quintorius, Field Historian, the legendary Lorehold can show up on the map of Ixalan to explore the Lost Caverns. Perhaps we can see a character like Niv-Mizzet, the current living Guildpact and genius leader of Izzet, explore Innistrad and learn about the necro-alchemy practiced there. With this change, Commander players can rely on the story by following more characters that interest them, regardless of the planes visited by the game.

Magic is a constantly changing game. This is true for both gameplay elements and story elements. A change in lore and the actual rules of lore to accommodate Commander’s growing format might seem like a drastic move on Wizards’ part, but from a business perspective, the math checks out.

Finding ways to keep those players invested in the lore no matter what setting the game chooses to use next is a powerful tool, especially when that audience places such emotional weight on the characters and the setting. overall experience. I believe my theory will eventually be true, the rules of the lore will be changed forever, and we’ll soon see that as far as the multiverse goes, maybe the Phyrexians will get their wish, in a sense: All Will Be One.