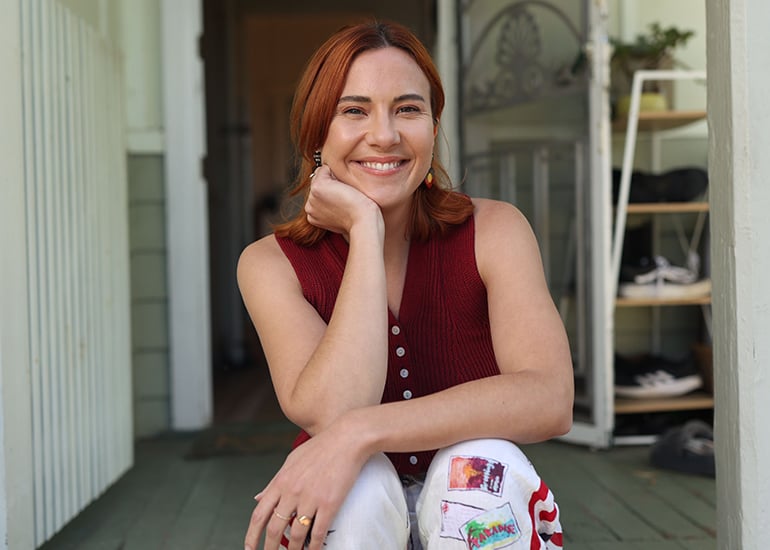 Four years ago, Zoe Condliffe was living in a van when she launched her startup She is a crowd as a solo founder. Today, Zoe leads a team of 12 “data activists” who have a powerful impact on the lives of women and people of diverse gender identities across Australia.

Almost 90% of women who are sexually assaulted do not report it to the police.

One of the reasons for this shocking statistic, according to Zoe Condliffe, is that the way the data is collected, analyzed and distributed means that it reflects existing power dynamics in society.

“The way we collect data is often sexist, racist, classist and ableist and this allows us to overlook the problem and not properly understand the magnitude of it,” Zoe told Startup Daily.

A self-proclaimed data activist, Monash University’s PHD researcher is on a mission to change that, using the concept of counter-data.

“Data activists are people who collect counter-data to try to right those wrongs and collect the unseen stories of marginalized people or the unseen data that is not valued by society, governments or corporations,” explains- she.

“Many traditional methods used by authorities to collect data on sexual assaults are again traumatic for survivors. We collect data in new ways. We try to dissolve all the barriers that prevent survivors from sharing their stories of sexual assault and gender-based violence and make it a truly cathartic, healing and positive experience for them.

This work is the basis of She’s a Crowd, a social enterprise that Zoe founded in 2018 while working for an international development agency that created Australia’s first-ever crowd mapping platform for street harassment, Free To Be.

“Thousands of survivors have shared their stories of street harassment on this platform,” says Zoe. “And that’s when I realized that survivors are willing to share and there’s an intrinsic desire to be heard and to feel that your story matters.”

When decision makers started approaching Zoe to use the data she had collected to influence policy, planning and violence prevention, she started She’s A Crowd.

Early in the launch of her startup, the biggest challenge Zoe faced was financial security.

“I had quit my job and was living in my van because I couldn’t afford rent and had no income,” she says. “It was terrifying. I didn’t know when I was going to take my next shower, yet I went to all these fancy meetings. It was so stressful and challenging both personally and professionally. But you have to understand it and make it work.

She’s a Crowd took off after six months. One of its first clients was the city of Melbourne. “I’m really proud to see our data reflected in personal security policies for the entire Victorian transport network,” says Zoe.

The story continues after the video.

Zoe’s goal was for She’s Crowd to become the largest geospatial database of sexual assault and gender-based violence in the world. She got there faster than expected – and now has a team of 12 people.

Like many founders, Zoe has found the level of administration involved in running a business overwhelming. From the start, she received support from MYOB and sees the benefits of their online accounting software as her business grows.

“It was really important for a small feminist social enterprise that was just getting started to have that support,” says Zoe.

The easy-to-use software aims to make life easier for business owners, especially when it comes to tax time. For Zoe, it gave her time to do more of what she loves and less of what she doesn’t.

“It’s a good thing that we now have access to software where everyone can use it. You can teach yourself. It’s so simple,” she says. “Starting a business is so overwhelming and I’ve never had to manage finances at this level before. With MYOB, you can spend your time doing the things you really love about the business. »

Making the cities of the future safer from gender-based violence

The company spent its first four years refining the way it collects data and designing its platform for survivors to share their stories. To date, over 100,000 survivors have shared their stories on their platform.

Zoe, who has won the Victorian Honor Roll of Women and the Telstra Best of Business Awards, says her team plans to spend the next few years improving the way the company distributes data.

This includes creating a system where customers can pay a subscription to access data and information through a dashboard.

To facilitate this, She’s A Crowd is crowdfunding. “Any of our supporters can go and donate to this fund and it will allow us to tailor how we provide our data,” says Zoe. “So I can look survivors in the eye and say, ‘Your data has been used to make your city, your neighborhood safer for women and people of diverse gender identities.'”

Learn more about She is a crowd and contribute to the crowdfunding campaign.

Have you just launched a startup? MYOB is currently offering businesses under two years old 50% off their first 12 months with MYOB Business Lite ($12 per month). Enjoy this amazing EOFY offer today.

This article is brought to you by Startup Daily in partnership with MYOB.