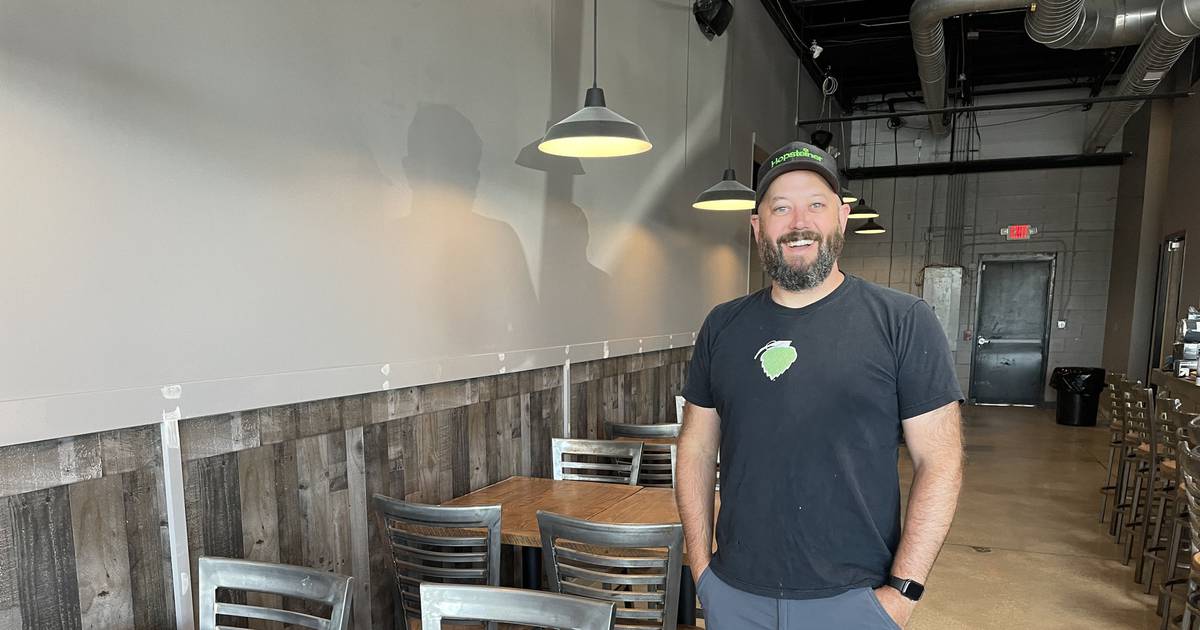 Over the past few months, Erik Pizer has demolished and redeveloped the Tinley Park space which housed 350 Brewing until earlier this year when it closed for good. While that might not sound unusual for a business owner about to open a new brewery and restaurant, Pizer has a unique perspective. He made his professional debut in this same building as the original brewer of 350.

“The first few times I walked in here it was just surreal,” said Pizer, of Palos Heights. “The cliche of blood, sweat and tears – I was there when we built this. A handful of us poured this bar ourselves with the cement. … It feels like home. I Been gone for way longer than I have ever been here.It’s brand new but feels like I never left.

Pizer rose from 350 more than five years ago, became head brewer at Rock Bottom Restaurant & Brewery in Warrenville, then helped open Milk Money Brewing in La Grange. When his role as head brewer ended in February, he was trying to figure out what might fit his ambition next.

“I wasn’t looking for a quarter brew gig,” Pizer said. “I felt like my skills and experience were a bit more than that. So I phoned.”

It was to its previous owner at 350. Pizer learned that not only was the space at 7144 183rd St. in Tinley Park available, but also that it came complete with contents, including furniture, a full kitchen and brewing equipment.

“It fit in every way possible,” Pizer said. “I signed the lease on April 1. If I had announced anything publicly that day, no one would have believed me. It’s too good to be true.

But Pizer wasted no time getting to work. It won’t maintain the punk rock vibe of 350’s dive bar — nor will it host convention center-caliber events. Flipside will be “as different in appearance as possible,” Pizer said. The vibe will be a bit more mature, and Pizer has spent much of its time peeling the stickers off of everything.

“It’s good to look good and act like we’ve been here before, because I literally did,” he said. “I don’t think anyone coming here expecting 350 will get 350. It’s a different vibe.”

The beer will be “clean and normal and straightforward”, he added, as he doesn’t much like playing with “goofy ingredients”. Pizer will focus more on classic beers – British styles, German lagers and beers of that type. With no immediate distribution plans, Pizer wants draft beer that supports its goal of making Flipside a neighborhood place.

“I’ll be toying with some of the trendier beers, but a place like this, in particular, having a bit of something for everyone and having it all clean and neat and well should be a pretty good recipe for at least last for a while,” he said.

A recipe that Pizer brought almost everywhere he went was probably one of the first beers on the menu. It started as the Crook County IPA under the 350 banner. At Milk Money it resurfaced under another name.

“The beer was never broken,” Pizer said. “That was never the problem with why I went anywhere, so I figured I’d keep doing it. … Why stop at something good?

When it comes to food, Flipside is going to skip the tacos, Pizer said, because there’s already another place on 183rd Street that does them well. There is a good spirit of collaboration between the breweries in the region, and he wants to embrace it. The Flipside menu will focus on the bar staples.

News from the southern suburbs delivered every Monday and Wednesday

“We’re going to focus on a really killer cheeseburger and some good wings, some salads, a chicken sandwich, that kind of stuff,” Pizer said. “The food you want to eat when you drink beers.”

Pizer still thinks the spot near the intersection of 183rd Street and Harlem Avenue is a great location — perhaps more so now than when 350 first opened due to the growing beer scene. Traffic in the area is excellent and Pizer hopes that by offering beer, cocktails, wine, cider and food at Flipside, it ticks enough boxes to get as many people through as possible.

This time around will also be different, Pizer said, as he does things on his own terms. He and his wife, Katie, are alone in this business.

“I’m just going to try to do things the way I think they should be done right now, without compromising that for someone else’s thoughts, because I don’t have to anymore,” he said. he declares.

Pizer plans to open July 29. The logo is already on the glasses and the wall, so things are getting closer to the “full loop”, he said, joking that the name has already been taken.

“It’s the flip side – all parts of my story so far,” Pizer said. “I started here. I end here. I will not do it again.

Bill Jones is a freelance journalist for the Daily Southtown.