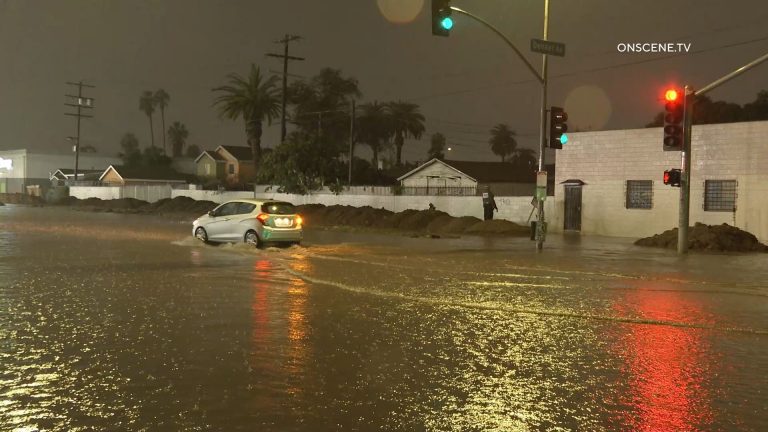 Heavy rains swept over the Southland overnight causing mudslides, debris flows and flooding that made the morning road messy and thankfully light due to the approaching holiday weekend.

Snowfall forced the closure of Interstate 5 through the Grapevine early Thursday morning in northern Los Angeles County, while a mudslide blocked traffic and trapped some vehicles on Coldwater Canyon Avenue in Studio City, and flooding blocked the Santa Monica Freeway (10) westbound near the McClure Tunnel in Santa Monica.

In Malibu, more than two dozen people had to be evacuated from the Leo Carrillo State Beach campground due to flooding, which also resulted in the closure of the Pacific Coast Highway. Decker Road has been closed to PCH due to several landslides, according to the city, which also reported several cases of downed trees blocking roads.

A section of PCH has been closed at Pacific Palisades due to a fallen tree that knocked down power lines, according to Caltrans.

Overnight, the Mulholland Freeway was closed in the Santa Monica Mountains between Las Virgenes and Cornell Highways due to mud that flooded the roadway.

The showers were to continue throughout the morning, with the rain expected to subside in the afternoon, giving way to a dry but cool weekend. By mid-morning, forecasters said they were still monitoring the storm’s track, but parts of Los Angeles County could still receive 2-4 inches of rain before the system leaves the area.

“All things considered, there is always the risk of higher (rain) rates and the potential for mudslides and debris from recent LA County burn areas,” according to the NWS.

Parts of the Santa Monica Mountains had already received between 3 and 5 inches of rain Thursday morning, with 2 to 3 inches falling in surrounding areas, the weather service reported.

A winter storm warning will be in effect until 8 p.m. Thursday in the mountains of Los Angeles County, excluding the Santa Monica Range. The National Weather Service said 1 to 3 feet of snow is expected to accumulate above 5,000 feet, with “light snow” falling at lower elevations. Winds were also gusty in the area, with the NWS indicating that sustained winds of 45 to 50 mph were expected, with higher altitude gusts reaching 60 mph.

“Travel could be very difficult, if not impossible,” according to the NWS.

About 18 inches of snow had already fallen in the eastern San Gabriel Mountains by mid-morning Thursday, according to the NWS, with 3-6 inches falling in Frazier Park.

Sections of the Angeles Crest Freeway were closed due to bad weather conditions, along with National Highway 39.

Caltrans reminded motorists that chains are needed on the Angeles Crest Freeway north of La Canada Flintridge, and the agency urged motorists to be aware of road conditions and anticipate possible closures due to the snow.

Wind gusts also impacted the Antelope Valley, where the NWS issued a wind advisory until 10 p.m.

In Orange County, a mandatory evacuation order that was in effect for the Silverado, Williams and Modjeska canyon areas in the Bond Fire burn area over fears of possible debris flows was downgraded on Thursday. morning to volunteer. Streets in the area that were closed overnight have been reopened to local traffic only.

The NWS has issued flash flood watch for coastal and inland areas of Orange County and the Santa Ana Mountains, including the Bond Fire burn area. Surveillance will be in effect until Thursday afternoon, and the evacuation order is expected to remain in place for at least that long.

“Excessive runoff can lead to flooding of rivers, streams, streams and other low elevation and flood prone locations,” according to the NWS. “Flooding can occur in drainage areas and poor urban areas. Flash floods and debris flows are possible, especially near scars from recent burns. “

NWS forecasters for Orange County said the region could receive up to 2.5 inches of rain along the coast and up to 6 inches in the mountains below 5,000 feet, with precipitation 0.6 to 0.7 inch schedules possible.

Flash flood monitoring will continue through Thursday afternoon for areas burned in Los Angeles County by the Lake, Bobcat, Dam and Ranch 2 fires. Forecasters said areas could experience “several hours of rain. moderate to high… which could lead to flash floods and debris flows ”.

According to the NWS, 2-4 inches of rain could fall in coastal areas and valleys in LA County as the storm moves, with 3-7 inches falling in the mountains.

“By (Thursday), more regular rainfall is expected to persist over LA County for at least the morning hours and then become more showers in the afternoon,” according to the NWS.

Forecasters said there would be a risk of thunderstorms.

Temperatures will also remain “considerably below average” across the region, according to the NWS.

>> Want to read more stories like this? Receive our free daily newsletters here!