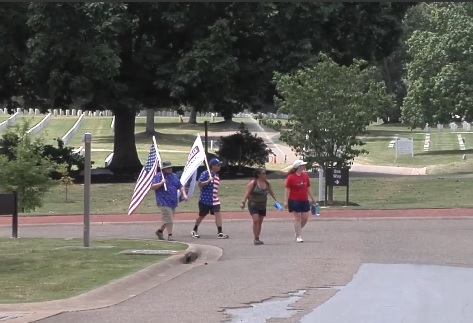 Think of it as an Olympic Torch Relay for Memorial Day

CHATTANOOGA (WDEF) – They were here just a few days ago. A large bus, parked at Chattanooga National Cemetery.

The non-profit organization called “Carry The Load” wants to highlight the true meaning of Memorial Day.

So they walk. And walk. Through and around places like this hallowed ground.

CASSIDY DILLARD, SOCIAL MEDIA MANAGER;
“We come to places like this cemetery to pay our respects. We certainly don’t want to cause a row. But these are the people we walk for. We want them to be remembered. »

Carry The Load was launched in 2011. At this time of year, the band branch out into five different routes in the United States. One of these routes through the picturesque town. And our cemetery.

This year’s march began more than two weeks ago in Vermont. With many stops along the way. Each group walks approximately five miles every two hours.

Not just walking. But talk.

COLTON MORROW, WALKER / CREW MEMBER;
“That’s part of the reason we’re marching. So we can tell and hear stories. We say you die two deaths. One, when you take your last breath. And the second time, when your name will be called for the last time.

The walk continues all week. Ending this Memorial Day weekend in Dallas.