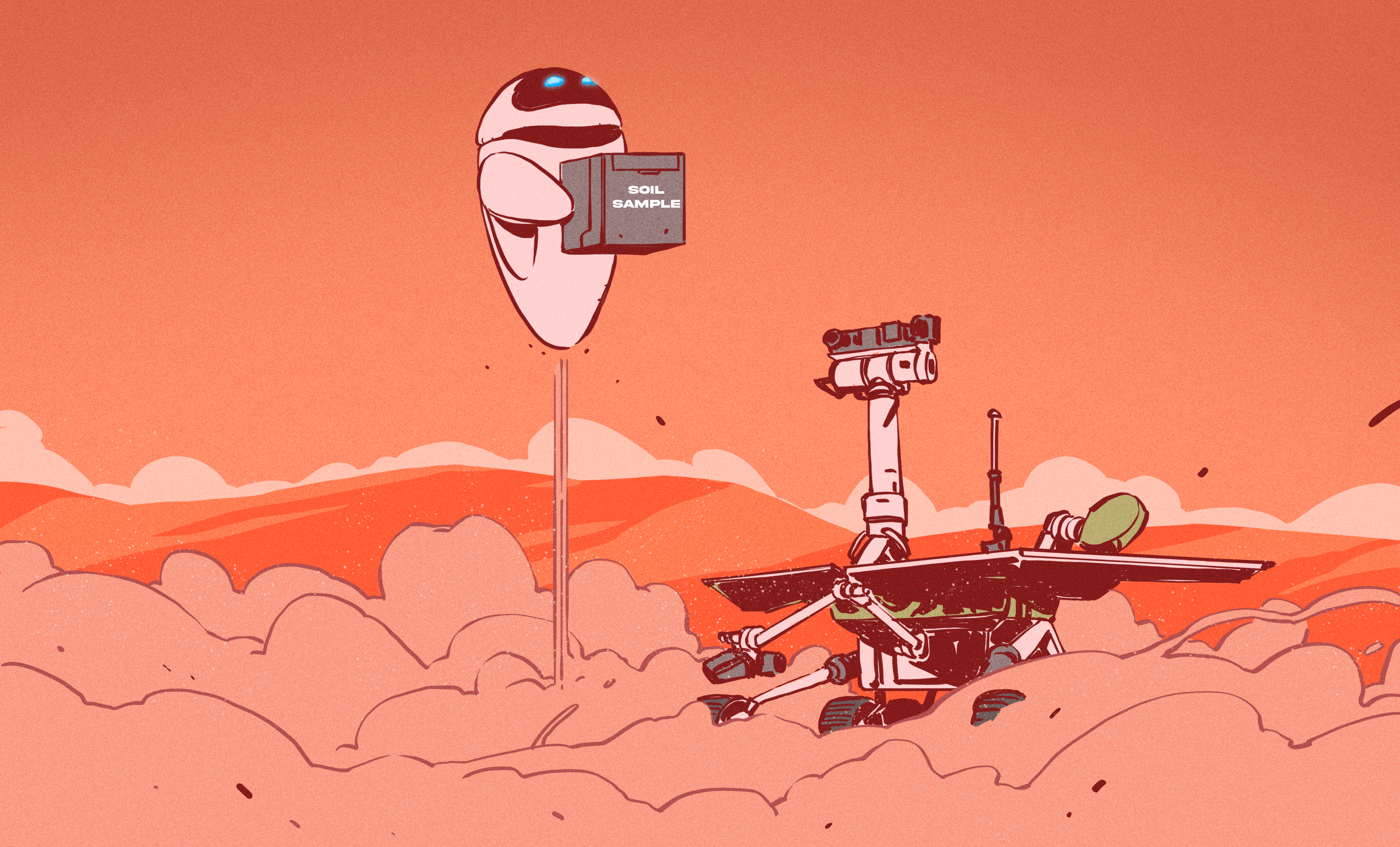 Ever since humans sent probes to Mars, there has been a desire to send rock, soil and atmosphere samples back to Earth for more detailed analysis. But the physics of such a mission are particularly demanding – a vehicle that could land on the Martian surface, collect samples, then launch itself back into orbit for return to Earth would be massive and prohibitively expensive with our current technology.

Instead, NASA and their international partners worked to spread the cost and complexity of the mission among several different vehicles. In fact, the first phase of the program is well under way.

The Perseverance rover has been collecting samples and storing them in 15 cm (6 inch) titanium tubes since landing on the Red Planet in February 2021. Considerable progress has also been made on the Mars Ascent Vehicle (MAV) which will carry the samples from the surface and into orbit around the planet, where they will eventually be picked up by another vehicle that will eventually bring them back to Earth.

But there are still big gaps in the overall plan. Chief among them is how the samples should be transferred into the MAV. Previously, the European Space Agency (ESA) had to provide a small “fetch rover” that would collect sample tubes dropped by Perseverance and bring them to the MAV launch site.

But in a recent press releaseNASA announced that those plans have changed significantly, thanks at least in part to the incredible success of the agency’s current missions to Mars.

Originally, the NASA-built Sample Retrieval Lander (SRL) was to deliver both the MAV and the ESA rover to the surface in a single shot. But in 2020, an independent review committee expressed concern with the size and mass of such a vehicle, in particular that it would require the development of a new entry, descent and landing (EDL) system which was therefore untested. They argued that the MAV and the ESA rover should land separately using a variation of EDL technology developed for the Curiosity and Perseverance rover.

Instead, NASA and ESA agreed to simply scrap the rover entirely and have Perseverance deliver the samples to the SRL itself. Based on the longevity of Curiositywho has now spent a decade on the Martian surface, chances are that Perseverance will still be operational in 2031 when the SRL is expected to arrive.

From an outsider’s perspective, it might seem like this should have been the plan from the start. After all, if the samples are already on a working rover, why do you need a second rover to pick them up? But keep in mind that when this plan was originally conceived, Curiosity and his twin Perseverance still had to prove themselves. Having the smaller, less complex ESA recovery rover was considered a reasonable precaution, so that samples could be recovered even if Perseverance itself had failed or got stuck.

But there is something of a catch. The robotic arm on Perseverance who handles the sample tubes does not have the dexterity to actually load them into the MAV. The best he can do is drop them on the surface close enough to the SRL for his 2.5 meter (8.2 ft) sample transfer arm developed by ESA can pick them up and store them. It won’t be the most glamorous transfer in the history of interplanetary exploration, but there’s something to be said for keeping things simple.

Although the new plan uses Perseverance as the primary means of transporting samples, the success of the overall mission is too important not to build some redundancy into the plan. So, instead of a second rover, NASA decided to go for a bold approach that would have been considered science fiction just a few years ago: Perseverance being unable to reach the SRL for any reason, a pair of helicopters derived from the design of the highly successful Ingenuity will try to retrieve them.

Not much information has been released on how these new helicopters will differ from their predecessor, other than the fact that they will now feature wheels mounted at the end of the landing legs and a miniature robotic arm capable of capture a single sample tube. The addition of wheels means the helicopters don’t have to land directly above the tube, they just have to get close enough to roll towards them. Once the sample tube has been picked up from the surface, the helicopter will pick it up and drop it off by the SRL.

Whereas Ingenuity far exceeded all expectations in terms of performance and longevity, the proposed modifications to the aircraft and this ambitious new mission present new challenges and risks. Sending a pair of helicopters provides another layer of redundancy, and it is likely that the second helicopter will not even be activated until the first demonstrates the ability to retrieve a sample, providing controllers with mission a valuable “redo” in case of problems. .

Of course, must Perseverance no help needed to complete its mission, you can be sure that NASA will have a scientifically valuable task for the pair of helicopters to accomplish. After all, you’re not hauling gear 100 million miles. not use it.