Harness Maker Ford was a longtime resident of Cedar Street; The expanded brick house has housed many people over the years 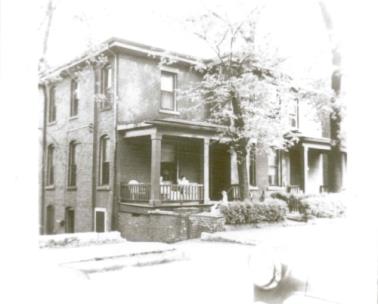 Civil War veteran William H. “Buck” Ford occupied one of the first homes built on Cameron Hill’s Cedar Street. Ford, who worked for many years in the harness, saddle and buggy business, lived there in the early 1880s when Cameron Hill was not heavily populated.

The substantial three-story brick house stood on the descending side of Cedar at 608. Around 1906, the house was expanded with a matching portion at 606 Cedar.

Ford, who lived in Chattanooga for 55 years and was a familiar face in town, first served as the foreman of Shelton & Howard harnesses and saddles. He was also involved in Tittle-Dickey products. W. Howard Tittle, who had married Ford’s niece, lived in part 606 Cedar.

Subsequently, Ford partnered with LG Gillespie. Gillespie-Ford Company handled strollers as well as harnesses and saddles at 173 Market St. The location was just down Cameron Hill from the Ford house.

Buck Ford lived for many years on Cedar Street, but by 1930 he had moved in with his niece, Mrs. WH Tittle, at 2200 Union Ave. at Highland Park. In November of that year, he fell down the steps of his cellar and died a few hours later.

In 1955, with the imminent urban renewal, side 608 was divided into four apartments and a basement. The occupants were JE Williams, JB Johnson, Miss Corrine Nixon, Mrs EB Bailey and with Miss Helen Watts and Mrs RS Bunch in the basement.

Mr. Lee Brown, carpenter, and his wife Maude took over side 608. Their tenants included Curtis Smith and Leon Cooper.

John Bogenshott, who ran the Stag Hotel on E. Eighth Street with A. W. Stanley, lived at 606 Cedar shortly after its completion. The Stag Hotel was “men only”.

Jacob Steiner had moved into 606 Cedar in 1910. He was originally from Hungary and had come to the United States at an early age. He lived in Jackson, Ms. before coming to Chattanooga during the boom time of 1887. He was a merchant and an active worker for Jewish welfare. Steiner was still on Cameron Hill—but at 416 W. Sixth St.—when he died in 1924.

William G. Broome, the store manager of A&P Tea Co., lived at 606 Cedar in the 1930s and rented a section from Andrew Foster.

At the start of the First World War, Mrs. RS Allred was there with Mrs. WA Wallace. AE Harris was on the second floor and WD Allred in the basement of the spacious house.

This was around the time Missouri “Zura” Douglas moved into 606 Cedar. Originally from Bledsoe County, his wife also had an unusual name – Grady Wilson Humble. Zura was the son of John and Angeline Goins Douglas.

Zura, who worked for OB Andrews Co., had previously lived at 514 Pine St.

The Douglas couple lived there for many years and had many tenants. In 1948 they housed CL Chadwick, Mrs. RH Pelham, Miss Ollie Gray and Mrs. JR Long. In 1955, as the end of Cameron Hill approached, the tenants were Mrs. KL Runyon, TH Payne, Raymond Payne, FS Sims and Clyde Tucker.

Family members still have a photo of 606-608 Cedar Street in the snow.