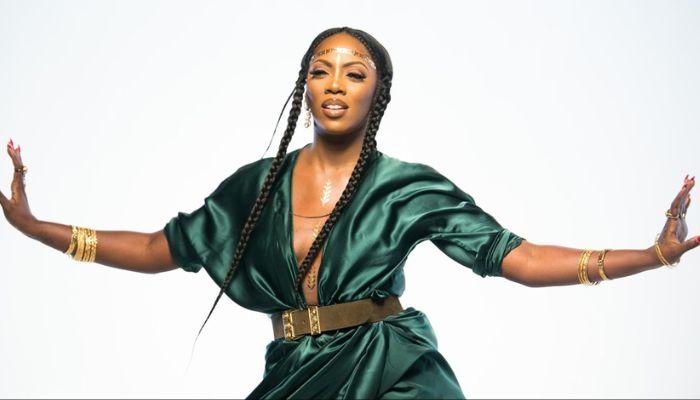 So when she went out with Kele Kele, Nigerians lined up behind Tiwa Savage. She received incredible attention and before we opened and closed our eyes she had become a superstar. Tiwa was beautiful, sensual with a beautiful body and a voice to die for. We danced, we cooed, we followed, we bought, we recommended.

It was difficult to know which songs were the best. Hit after hit, the first lady of Mavin Records has become a prominent face in Nigeria’s high-profile social architecture. She became easily recognizable and became the face of many brands. Even her son, Jamal, fresh out of diapers, has become a brand model for a baby product.

Tiwa appeared confident in the clip urging us all to buy this baby product for our children. If I still had children that age, I might have thought of that. There were offers, shows and more mentions. Other musicians, including Wizz Kid, joined her for massive collaborations.

It should work for them maybe… but I honestly don’t want to look like an insect or someone seen as a person with multiple problems. But then what do I know… I am a small rural girl who became an animator

Tiwa was in top form and the money was pouring in. Step into the celebrity lifestyle; bodyguards, more online followers, fast cars, nightclubs and a luxurious lifestyle. Tiwa Savage looked unstoppable and Tiwa Fever looked untouchable. Until… bam… the collapse started about six years ago.

Tiwa began to unravel citing her then-husband Teebillz and his manager as her problem. There were stories of drugs, cocaine to be specific, and alleged physical and emotional abuse. She seemed suicidal and her fans rallied behind her.

Before long, her husband, Teebillz, giving his own side of the story, accused her of infidelity, not caring about family and domestic issues, only caring about the next blow. Other celebrities were mentioned in the messy story that became mainstream entertainment content at the time.

Everything was quiet after, she got divorced, kept making more hits and then bam…a sex tape. This publicly released tape became one of the most viewed videos on many platforms at the time. Endorsements were withdrawn, Tiwa explained, but it remained in our consciousness forever.

Kim Kardashian knows what a sex tape can do, and so does Tiwa Savage. Seeking more followers, hoping to become more famous. Then Tiwa gave us the bizarre explanation that she was accidentally released by the person she was with at the time. Stop the nonsense!

People trolled her on social media, but Tiwa’s body parts in a private activity were already in the public domain. His itsy bitsies are well recognized now. His grunts meant to be at private inner caucus activity with the one one is in love with are now in the possession of thugs, drug addicts, random comrades, mechanics, chefs, academics and politicians.

Truth be told, we can write a doctoral thesis on Tiwa’s body parts and also research her behavior and mannerisms during intimate moments. This should be of interest to academics, celebrity managers, and entertainment journalists. Without comparing, as Tiwa is a Lilliputian where Fela is, the Fela phenomenon has received massive attention in academia and several universities around the world.

Thus, Tiwa can be studied for reasons other than her job. More interesting, we now know that since she has already shown us her little bits in bed, we might as well expose her in the street. What’s new? We’ve seen this before although the sizes of things may have varied…but still Tiwa is Tiwa. So now her butt is a poster for both online and regular newspapers, recently arrived at a nightclub with her bare behind for all of us to see as a game.

But why I even love her communication skills is that she is an absolute study in verbiage. She is her own lawyer and media strategist. His explanation? Her creator told her not to wear anything. He had taken care of the covering of the body parts and she would be fine.

Tiwa an adult? Did she wear it in the dark? Anyway, I saw the clip and while providing more material to researchers, I personally found it offensive and disgusting. As an elderly lady, I flew with a quip when she saw a young girl pacing back and forth on board with her whole belly open and a chain over her navel.

“Does this girl think we don’t have navels?” the visibly upset woman asked me. So yeah… does Tiwa think she’s the only one with an ass and we should all be impressed?

Then, of course, before that, she casually walked around in a braless function and looked insecure as she gathered her jacket together while covering her body parts with her palms. More material for researchers. One comment online was that she should have just taken off the jacket and showed up bare chested.

My late parish priest, Father Ojukwu, would say that we all know that God created women with breasts. You don’t need to remind us. So. But I guess the Tiwa of Kele Kele and the Tiwa of today are not the same. In these days of more body parts, less interest in propriety… prepare for more Mrs. Savage… a striptease… take a look… anything goes, all the time with her son Jamal Who is watching.

Nothing is forbidden. You’ve seen breast before…you’ve seen butt before…in bed…so why are you upset…calm down…when we talk about her in 10 years it might not be about her songs or her job… maybe the size of her buttocks?

Anyway, I’m fascinated by butterflies and wasps. Butterflies for its amazing colors, its transformation from an ugly caterpillar to elegance in flight. But the wasp for its strange shape. Tight at the waist and oversized for other sizes at the top and bottom.

I have, however, paid more attention to the butterflies over the years and less to the wasp. But I had to look again. Indeed, in all areas, especially among celebrities, breasts and buttocks are the fashionable body parts. So someone you previously knew on a movie set or someone you knew personally suddenly turns into a wasp.

When you last saw them, their natural buttocks were at a normal angle, now it’s like they’re stuffing their backs with rags or carrying unwanted weights, barely able to walk. It’s crazy.

Then the waist is bent like that of a wasp. Also, their breasts are swollen like extra balloons and they walk around showing off those things that make them look like earthly, unsightly, unnatural beings. No human being is built like a wasp, but our ladies are ready and ready.

Everywhere you turn. People sleep in series and do other unsightly things to earn money for a wasp look. It should work for them maybe… but I honestly don’t want to look like an insect or someone seen as a person with multiple problems. But then what do I know… I am a little rural girl who has become an animator. All in all, I can’t afford it… Hello Tiwa and hello her modern day wasp friends. I salute oh!