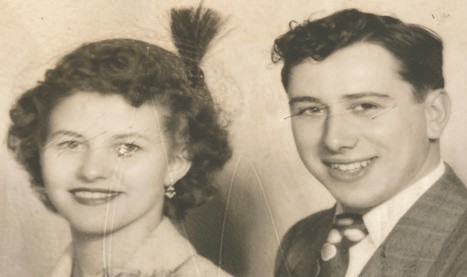 Robert Klune and Delores (Brodin) Klune were married on November 15, 1950. After a long search, Tony Klune, the couple’s son, could not find a photo of his father in his military uniform. So, Tony sent the second best identifier: his parents’ wedding photo. Photo submitted.

EDITOR’S NOTE: This is the 32nd story in the collection of stories compiled by members of the Eveleth High School Class of 1972 about their fathers’ military service and their mothers’ service on the home front. This week’s edition features a story about Robert Anthony Klune as told by his son Tony Klune. —Jill Pepelnjak, Editor

On August 30, 1946, at the age of 17, my father (Robert Anthony Klune) enlisted in the United States Army and entered active duty the same day. (A 17-year-old was allowed to enlist, but only if he had parental consent.)

After basic training, Dad was to be assigned to the Panama Canal Department, the US military department responsible for the defense of the Panama Canal Zone. But, instead, Dad was assigned as a parts clerk in the 53rd Engineers with the Army Corps of Engineers. His responsibilities were to requisition, receive, classify, store and distribute parts for heavy construction equipment. He also prepared return and collection sheets and took regular inventory.

“Under the terms of surrender that ended World War II, Japan fell under Allied occupation. U.S. Army engineers faced a daunting challenge in constructing facilities for the occupation forces and rebuilding the infrastructure of the defeated country. Japan’s immediate post-war standard of living had fallen to a subsistence level, and US Army Air Force bombing had destroyed much of of the industrial base of the islands. Source: US Army Corps of Engineers Headquarters website.

During his deployment, my father also spent time in Korea, which had been ruled by Japan from 1910 until their surrender in World War II. After World War II, the United States Army Military Government in Korea governed the Korean Peninsula, south of the 38th parallel, until the establishment of the Republic of Korea (South Korea) on August 16, 1948.

My father served in various occupied areas of Japan until November 24, 1947, when he left on the United States Army Transport Ship (USAT), General Frederick Funston. The hope was to be home by Christmas. The ship arrived at the port of San Francisco on December 5, 1947, but it was not without problems. “It emerged today (December 18) that there would be a Merry Christmas after all for the 953 soldiers who returned from Japan, only to come up against some quarantine spinal meningitis at this Army Separation Center ( Camp Stoneman) Doctors were carefully examining the men today in the hope that they could be shown not to have the disease which caused the death of a soldier who had returned with them. Source: Oakland Grandstand, December 18, 1947.

The soldier who died was only eight months older than my father. After a successful screening, Dad was allowed to receive his separation and honorable discharge on December 22, 1947, allowing him to return home to Eveleth for the Christmas vacation.

For his service, my father received the World War II Victory Medal and the Japanese Occupation Army Medal.