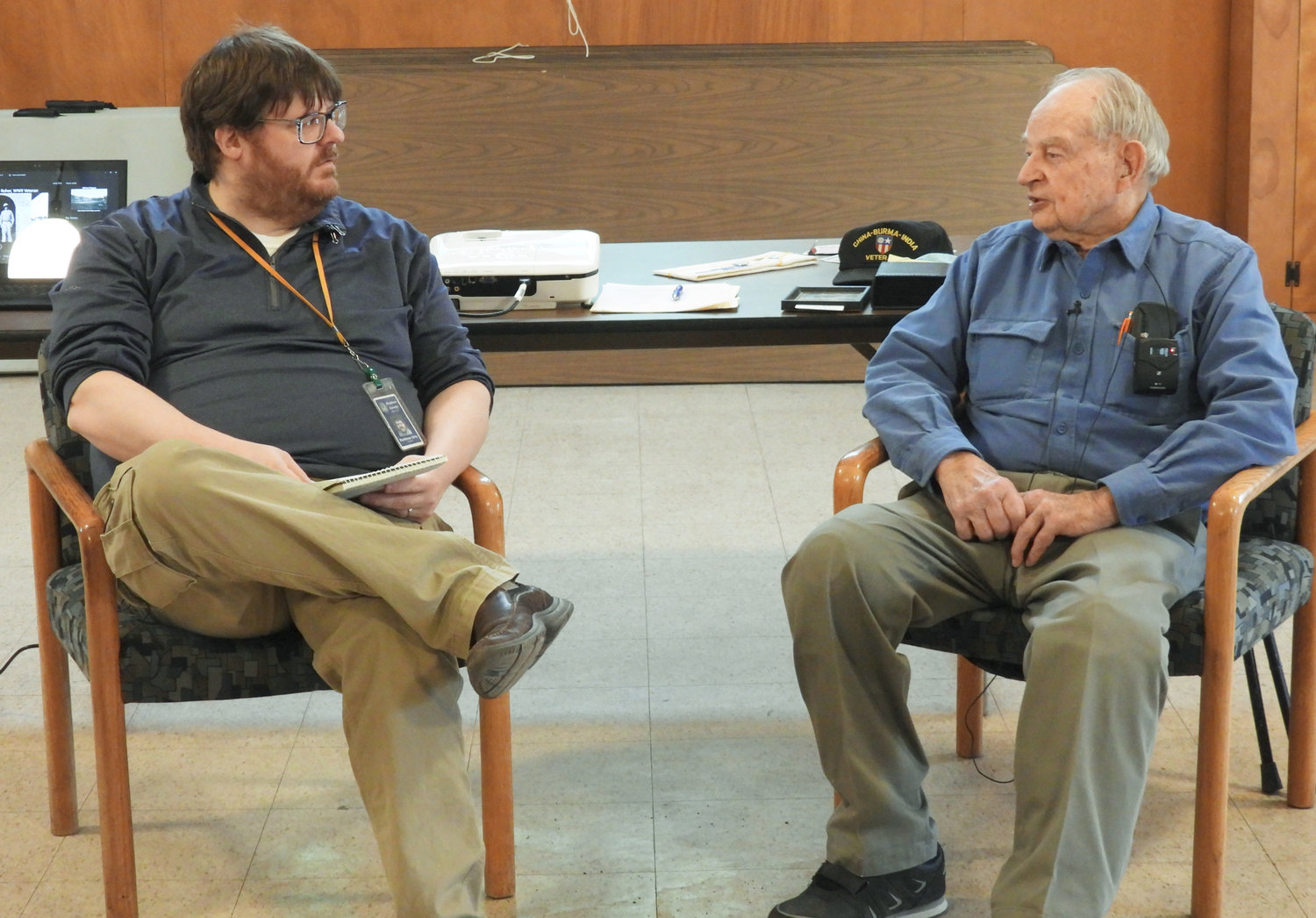 CAZENOVIA — Veteran and longtime resident of Manlius Wallace Roher’s service during World War II was unique. After all, not everyone has had to go through bootcamp four times.

Roher, who recently celebrated his 100th birthday, sat down with Madison County historian Matthew Urtz to share his story, and his four basic formations were the most tasteless part of the story.

Five years after graduating from Stockbridge Valley High School, Roher enlisted as a weather officer in the United States Army. Asked by Urtz why he felt qualified to be a weather officer, Roher said he was at the top of his class. And after passing an exam, Roher was ready for meteorological officer school.

Weather officers were essential during World War II as they provided important information to commanders who were making battle plans. Famously, British Royal Air Force Weather Group Captain James Stagg persuaded General Eisenhower to change the date of the Allied invasion of Europe from June 5 to June 6, 1944 – avoiding the high winds and waters that would have seriously affected D-Day.

Roher said her father was against her enlisting in the military. Roher was the eldest in his family and had many responsibilities. “(My father) had said that the company had just recovered financially and he did not like the idea of ​​me leaving since I would be cutting trees and hedges, building or digging cellars. It made it quite convenient for him – all he had to do was reach out.

For Roher, going to war would leave his family without a solid set of hands.

“I thought to myself, I’m here, I graduated from high school and I kinda know what I’m doing,” Roher said, explaining his reasoning for enlisting. “I thought there should be a representative of our family. I thought, ‘What do I have to lose?’

“Where did you go (after your enlistment)? asked Madison County historian Matthew Urtz.

“I went to Morrisville to get on a bus,” Roher said to the audience’s roars of laughter. From there, Roher ended up in Niagara Falls and didn’t get the warmest of welcomes. “They asked, ‘What are you doing here? “”

Roher gave up his papers, only to find that the Niagara Falls base had no weather program. Instead, they gave him his shots and then sent them to Georgia – a base specializing in anti-aircraft training.

“So I learned to fire 60mm anti-aircraft guns and had basic training,” he said. Roher was given the option of getting a base commission but declined and was later shipped off to Maxwell Field in Alabama. And he received the same salvation. “What are you doing here?”

“I try to follow orders,” Roher had told the officer. Again, they had no school but spent time observing the weather at the control tower for two weeks, while undergoing basic training.

“They didn’t know what to do with me, so they sent me [Kessler Field] Mississippi,” Roher said. “And then they asked me again, ‘What are you doing here?'”

After another trip to North Carolina, Roher finally got her training and had three months to learn what most people take a year to learn, while doing another basic training.

Roher’s commissions took him first to India for the China-Burma-India Theatre. After a rather bumpy and soaking trip aboard the USS General William Mitchell, Roher landed in Bombay, now Mumbai. The experience was quite different for the young man from central New York, particularly when a young girl came running towards the soldiers, begging them to buy her baby.

“She must have only been 15 or 16 and she tried her best to sell that baby,” Roher said. “She didn’t have enough milk to feed him and thought he would die if he wasn’t given to someone else. She offered it for five rupees. A rupee at that time was worth about 30 cents. So that tells you how much she expected to get for the baby.

The soldiers had to ignore him and push him away. At this point, the girl collapsed to her knees and started crying, according to Roher.

“That was our introduction to India,” Roher said grimly.

India was not their final destination, however. The goal was to get to Kunming in China but to get there they had to fly over “The Hump”. The Hump was the nickname pilots gave to the eastern end of the Himalayan mountains over which they flew military transport planes from India. And though it sounds like a minor obstacle, the trip on The Hump turned into one of the most dangerous moments of Roher’s military career.

“It was August 9, 1945,” Roher recounted. “All the planes were in service, and they brought out an old (Douglas) C-47 (Skytrain). It needed an overhaul and had been stowed in the back.

Boarding the plane and settling in, Roher and his team expected a rather routine trip to Kunming. So they settled into the canvas seats, and even though it was 110 degrees, they had their coats ready for their climb to altitude.

“Both the co-pilot and the radio operator objected to flying in this aircraft,” Roher said. “It needed maintenance, but we went anyway and flew 40 miles south of Calcutta.”

They found a replacement radio operator and took off, only to have the pilot brake halfway down the runway. They found the engine had lost oil pressure and replaced the pump.

“The mechanics also decided to check the engine and discovered that the four large nuts holding the engine in place could be finger tight,” Roher said.

The squad was then left waiting for a new plane carrying a group of men ready to return home. However, this aircraft dipped its wing too low and clipped the top of a tree. “It crashed, killing everyone on board. And now we were left waiting for our plane.

Everyone was anxious to board, but a new C-47 was boarded with a safe and uneventful flight for the second leg of its journey. The final leg of the trip over The Hump was to be in a C-46 Commando; the first Roher had ever seen.

“We loaded up and took off over the mountains,” he said. “It was neither heated nor pressurized. And when we got above 16,000 feet, frost formed inside the plane on our backs. And the mountains below us were all sharp ridges and valleys with low streams like the back of a leaf.

“We crossed a high ridge and the plane suddenly seemed to descend like a high-speed elevator,” Roher said. “The pilot gave the plane full throttle, and it started to vibrate and squirm. And the ground seemed to be coming up very quickly…and the parachutes hadn’t been launched.

Not that they would be useful. Being so high in the mountains, the parachute would not have time to deploy, and even if they could, they would be stuck in the Himalayan mountains.

“It felt like we had been down for a long time, and looking out the window, it looked like the wing plane had flexed six feet,” Roher said. “I thought we were going to break them right away.”

A feeling of fear overwhelmed the team, followed by relief as the plane began to fly to the right. When they landed, Roher and his team asked what had happened.

When the C-46 crossed the ridge, it reached a downdraft of 100 miles per hour. The plane was flying at 4,000 feet above the ground at the time. The plane was losing 100 feet per second and it took 30 seconds to cross the downdraft.

Roher then worked with The Flying Tigers, a group of American volunteer pilots who helped oppose the Japanese invasion of China until the end of the war.