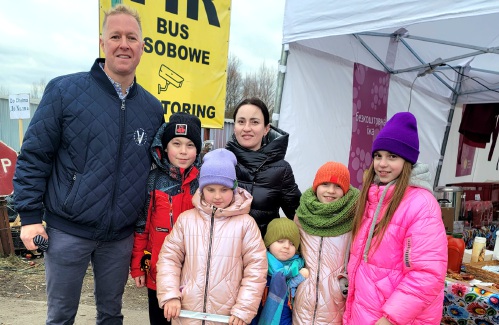 HADLEY – Ukrainian women and children seeking refuge after the Russian invasion of their country are fleeing to Poland daily, some coming with luggage, others with nothing more than the clothes they are wearing, and many leaving behind loved ones, including spouses.

“It’s heartbreaking,” said Paul Kozub, a Hadley resident and founder of Valley Vodka Inc., who since Sunday has been visiting the Polish-Ukrainian border with the Reverend Piotr Pawlus, pastor of Most Holy Redeemer Catholic Church in Hadley. , himself a native of Poland.

What Kozub observes during his week-long visit to Poland’s eastern border is a steady movement of buses between countries, as more and more Ukrainians arrive to flee their war-torn country.

“Every bus is full of people,” said Kozub, who is moved by the children whose lives are devastated by the Russian invasion. “That’s what attracted me was seeing all the kids.”

Kozub made his first trip to eastern Poland in 2005 when starting his craft vodka business, and in 2019 he bought a distillery in Kamien, where most V-One vodka is produced.

“This part of Poland has been such an important part of my life,” Kozub said. “It’s only a few hours from the Ukrainian border. I feel compelled to do something to help the Ukrainian people.

One of those ways to help was pledging to donate more than $5,000 directly to relief efforts, as well as donating $1 from every V-One bottle sold in March to a fund to support the Ukrainian people.

At the border, Kozub, who said he brought a large sum of money with him, began distributing money directly to families, although he said there was some reluctance on their part to accept the gift which he hopes can be used for necessities as they rebuild their lives in Poland.

“They are a very proud people,” Kozub said of the Ukrainians he met.

Kozub said traveling about 4,320 miles from western Massachusetts gives him the opportunity to show the international community supports Ukraine. “First of all, I want them to know people in America, and people around the world, care about them,” Kozub said.

The trip also gave him the chance to learn first-hand about the horrors of war and hear stories of atrocities, such as that of some Ukrainians who had been promised safe passage from Kyiv but were later shot down by Russian snipers as they left, he said.

He also saw families video chatting with men now fighting in the war for Ukraine.

Kozub doesn’t see the situation improving anytime soon. “No one was prepared for this – everything will be worse than they expected,” Kozub said.

Yet he also sees a silver lining in global affairs. Poland, which some citizens remember from experiences during and after World War II, has already taken in more than a million refugees, and many can find space in people’s homes, as well as in churches and schools.

“People have been extremely receptive,” Kozub said, noting that even with the influx of people there is an effort to maintain normal life in the cities.

“Poles have really stepped up to help with what’s happening,” Kozub said. “People can cross the border and assimilate and become citizens.”

“We know there is tremendous harm happening against innocent Ukrainian citizens,” Pawlus said. “At the same time, we witnessed the outpouring of love and support from the Polish people who, by the thousands, opened their homes to refugees.”

Kozub and Pawlus directly helped a 17-year-old Ukrainian woman and two other members of her family by driving them from the border to Lublin, a town he already knew from an orphanage.

Tents set up by charities are providing food and other basics to the refugees, while Caritas, a Catholic charity, is also involved.

Kozub said he was happy to be able to share news about what is happening.

“To me, this is a perfect example of good versus evil,” Kozub said. “These people didn’t deserve this, and I felt compelled to go help them.”

Scott Merzbach can be contacted at smerzbach@gazettenet.com.