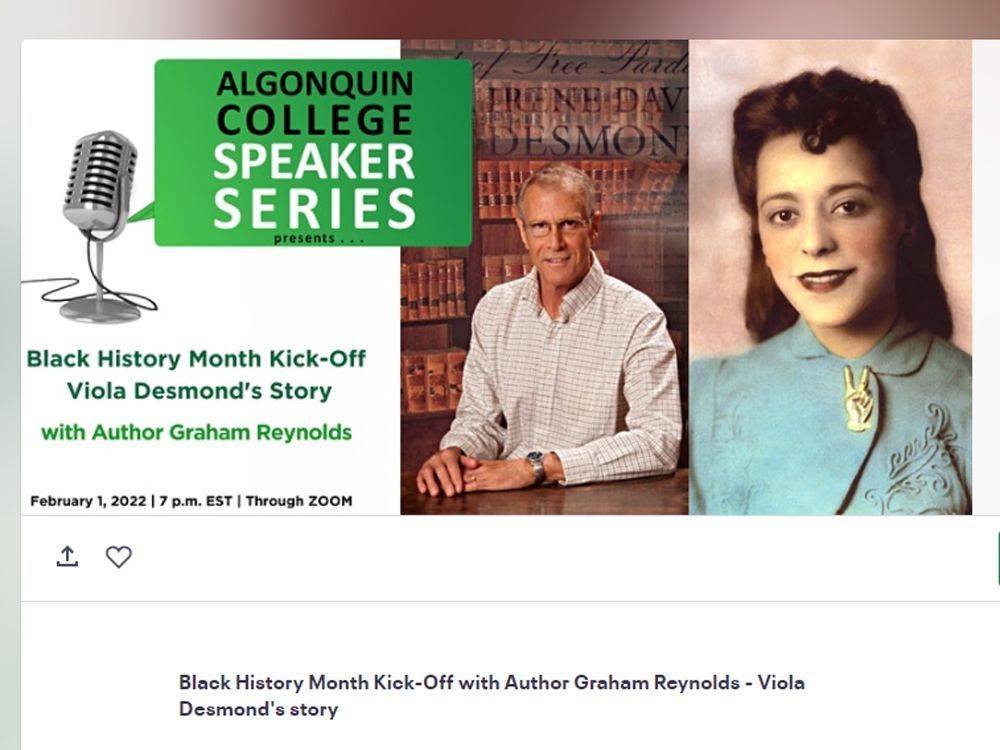 Viola Desmond just wanted to watch a movie, but what happened to her on November 8, 1946 in Nova Scotia marked a turning point in the civil rights movement in Canada. Desmond was a successful black businesswoman, operating a beautician training school in Halifax and eventually expanding her business across the province, but it was car trouble that set her on a path that would make her one of Canada’s greatest historical figures.

On that fateful day in 1946, Desmond was on a business trip from Halifax to Sydney when her car started acting up and she was forced to park in a nearby service garage in the small community of New Glasgow. The mechanic told him that it would take a day to repair the vehicle. In order to save time, Desmond decided to go to the Roseland Theater and see a movie.

At the counter, Desmond requested and paid for a lower-level seat, but the ticket manager instead gave him a balcony seat, which was the separate seat for black customers. Desmond tried to be seated on the main level of the theater anyway but was stopped by an usher and eventually was forcibly removed from the theater and arrested.

She spent the night in the local jail and appeared before a city magistrate the next day where she was found guilty of defrauding the provincial government for failing to pay the one-cent amusement tax on the ticket. . The penny represented the difference between the ticket for a balcony and the seat on the ground floor. Without any legal representation, Desmond paid a $26 fine imposed on him by the presiding judge, who awarded $6 in court costs to the theater’s general manager.

The black community in Nova Scotia was outraged. While Desmond’s husband wanted her to let things go, the Nova Scotia Association for the Advancement of Colored People raised money to fight her conviction. She eventually lost her appeal for technical reasons and her case quickly faded from public consciousness. In 2010, long after Desmond’s death in 1965, she was posthumously granted a free pardon by the Nova Scotia government and recognized for her contribution to the fight for racial equality in Canada.

On February 1, the Pembroke Waterfront campus of Algonquin College will kick off Black History Month with a special virtual lecture series on the life and legacy of Viola Desmond by author and civil rights historian Graham Reynolds.

In 2000, Professor Reynolds was teaching a course in the history of racial discrimination at Cape Breton University when he met Desmond’s younger sister, Wanda Robson. Robson was 73 but was interested in the course and signed up. Reynolds describes it as “the life and energy of the classroom”.

“Having Wanda Robson as a student was a watershed moment in my career. It began a two-decade long journey and collaboration to raise awareness about past racial injustices, especially in regards to the story of Viola Desmond” , says Reynolds.

Robson went on to earn a Bachelor of Arts degree in college, graduating at age 77, and in 2010 published her own book titled, S ister to Courage: Stories from the World of Viola Desmond, Rosa Parks of Canada.

Also in 2010, the Viola Desmond Chair in Social Justice was established at Cape Breton University. Reynolds was named president and worked with Robson to write a book called The Canada of Viola Desmond, which was published in 2016. Two years later they wrote Viola Desmond: Her Life and Times.

“Viola Desmond’s story brings to light a long-forgotten chapter in Canadian history. And, in order for us to move forward as a nation and build a more just society, we must confront these darkest pages of our past,” says Reynolds.

In November 2018, 72 years after being dragged from the Roseland Theater because of the color of her skin and 53 years after her death, Desmond was honored to become the first woman to appear on a Canadian $10 bill, confirming her place as one of Canada’s bravest people and historical figures.

Canadians have celebrated Black History Month for decades after the City of Toronto passed a proclamation in 1979 to recognize the contributions of Black Canadians. It wasn’t until 1995 that the House of Commons unanimously passed a motion declaring February as Black History Month.

On the 75 and anniversary of Viola Desmond’s arrest in 2021, Prime Minister Justin Trudeau told Canadians, “Black people have helped shape our history and our collective identity and are proud to be leaders in communities across the country. Despite all of this, systemic anti-Black racism still exists in Canada and has undermined the livelihoods of Black Canadians and caused deep pain. This must stop.

By taking a stand, Viola Desmond tried to stop racial segregation. His cause remains active today.

Registration is now open for the Viola Desmond Lecture Series which begins at 7 p.m. on February 1. The session is free for anyone over the age of 60 thanks to funding provided by the federal government’s New Horizons program. For more information on Graham Reynolds or to get tickets, visit https://www.eventbrite.ca/e/speaker-series-black-history-month-kick-off-with-author-graham-reynolds-tickets -244517336937.