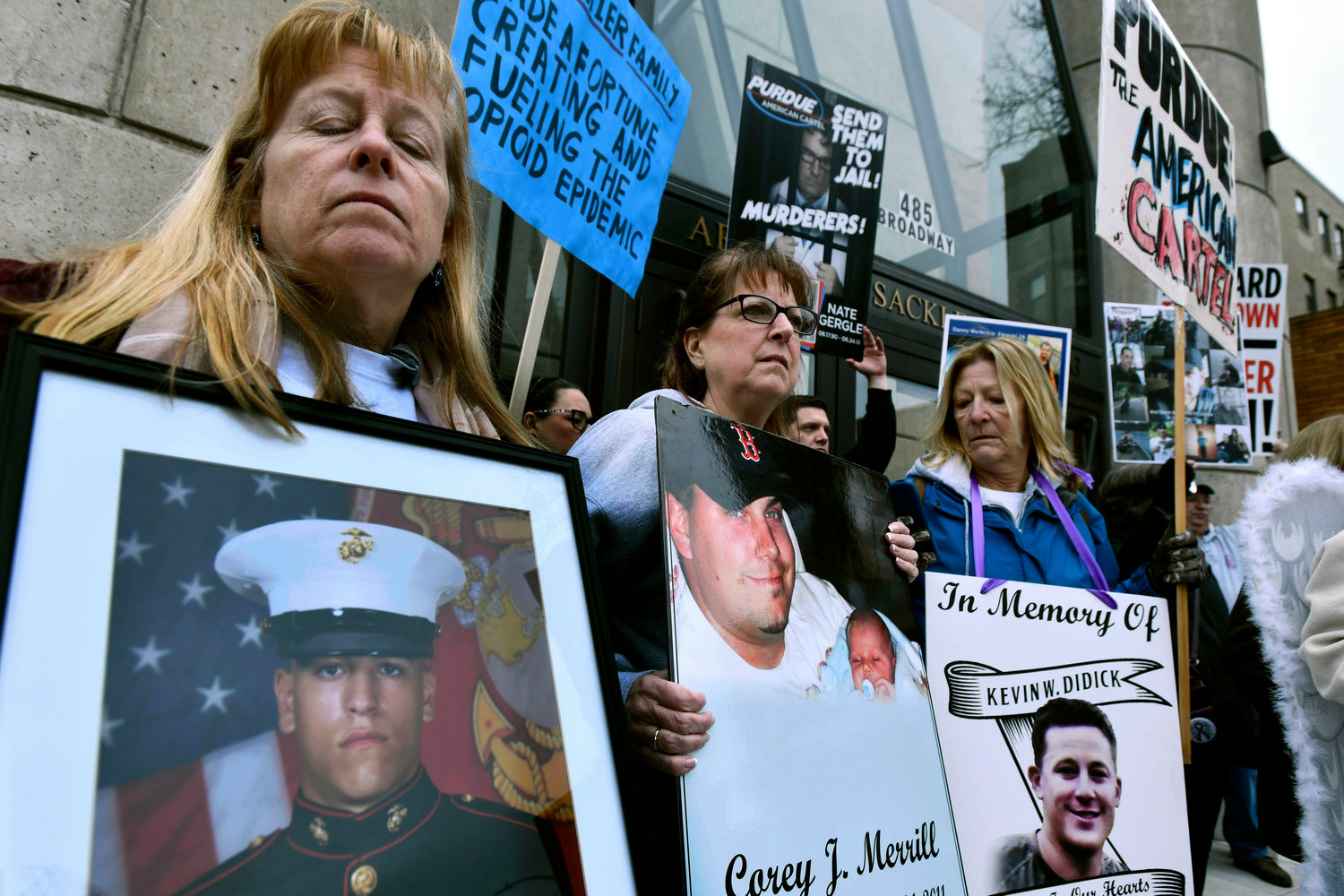 NEW YORK — Kara Trainor composed herself, looked into a camera, and began talking to the drugmakers she holds responsible for two decades of suffering that stretched from her to a son born addicted to opioids.

Three members of the family that owns OxyContin maker Purdue Pharma silently watched or listened to the virtual court hearing as Trainor described giving birth to a baby who quickly plunged into withdrawal – “the cries you will haunt you for the rest of your life” – and what it was like raising him. At 11, he still uses a sippy cup and diapers.

Trainor and others who have suffered or lost loved ones to opioid addiction had waited years for this moment: a direct, albeit virtual, confrontation with members of the Sackler family in court over the consequences of the painkiller that made them a fortune while helping fuel a deadly drug epidemic. The opportunity finally presented itself for about twenty victims or their relatives during an extraordinary hearing of the bankruptcy court on Thursday.

Some walked away exhausted, some angry, some relieved, and not everyone knew if the Sacklers, who weren’t allowed to respond during the session, were moved. Still, several people who gave statements said they appreciated being able to speak on behalf of their lost loved ones.

“I can feel, as a mother, that my son was seen and heard by the family,” said Trainor, of Kalamazoo, Michigan, who was prescribed OxyContin at age 21 and quickly became addicted. She is now 40, recovering and working with others struggling with addiction.

“It will be part of my healing and a 20-year closure,” she said, “finally being able to be heard.”

The hearing, highly unusual for US bankruptcy court, was suggested by a mediator who helped negotiate a potential settlement of thousands of lawsuits against Purdue. If he gets final approval, the deal will generate $10 billion or more to fight addiction and overdoses, with the Sacklers contributing up to $6 billion in return for protection from civil lawsuits. Up to 149,000 people who have struggled with addiction or lost loved ones to it are to share $750 million in the settlement.

One after another, victims logged on from Hawaii to New Hampshire on Thursday with tales of surgeries and illnesses that led to prescriptions for OxyContin, followed by addiction, despair, treatments for addiction, personal and financial ruin and, all too often, death. .

Kristy Nelson released a recording of her frantic 911 call reporting that her son was unresponsive. Stephanie Lubinski recounted how her husband walked into their basement and shot himself in the chest.

Former Purdue chairman and chairman of the board Richard Sackler listened in on the phone, a sore point for some victims who found it disrespectful that he did not confront them. Her son, David Sackler, and another family member, Theresa Sackler, appeared on camera, appearing attentive but showing little reaction.

“They just sat there, alone but stone-faced, and never changed their expression, ever,” a frustrated Lubinski from Blaine, Minnesota said afterward.

The Sacklers have never unequivocally apologized. They released a statement last week saying they had acted lawfully but “regret” that OxyContin “unexpectedly became part of an opioid crisis that has caused grief and loss to far too many families and communities”.

OxyContin, a pioneering extended-release prescription painkiller, hit the market in 1996, while Purdue and other drug companies funded efforts to suggest that prescribers consider opioids for a wider range of pain conditions than they didn’t think so before. Purdue claimed that far less than 1% of people who were prescribed opioids developed an addiction, although there have been no rigorous studies to support this claim.

Tiffinee Scott asked the Sacklers if they had ever resuscitated one of their children from an overdose, like she did for her daughter before finally losing her to an overdose at 28. said the mother.

“Shame on you,” she told the Sacklers, though she later said she didn’t expect a backlash from people she considers heartless. “For once, we felt like we had a sense of power over privilege, when it came to the Sacklers,” she said.

After her 21-year-old son Chris Yoder died of an overdose, Dede Yoder used to swear at the Sacklers as she walked past Purdue headquarters in Stamford, Connecticut, near her home in Norwalk. She felt vindicated by the Sackler bankruptcy case and public scrutiny. “Being part of this court case is very important, and my son’s story is part of the case,” she said after giving her statement at the hearing.

Las Vegas’ Ryan Hampton found “a level of catharsis” as he testified Thursday about the years of addiction, overdoses and periods of homelessness he endured after a knee injury. But it bothered him that the victims and their loved ones were delivering a message that he said should come from the authorities.

Like many of those who testified, he wants the Sacklers to be criminally charged. There are no signs it will happen, although seven US senators last month asked the Justice Department to consider it. Purdue Pharma has twice pleaded guilty to criminal charges.