The story of Indian underdogs vying for an Oscar 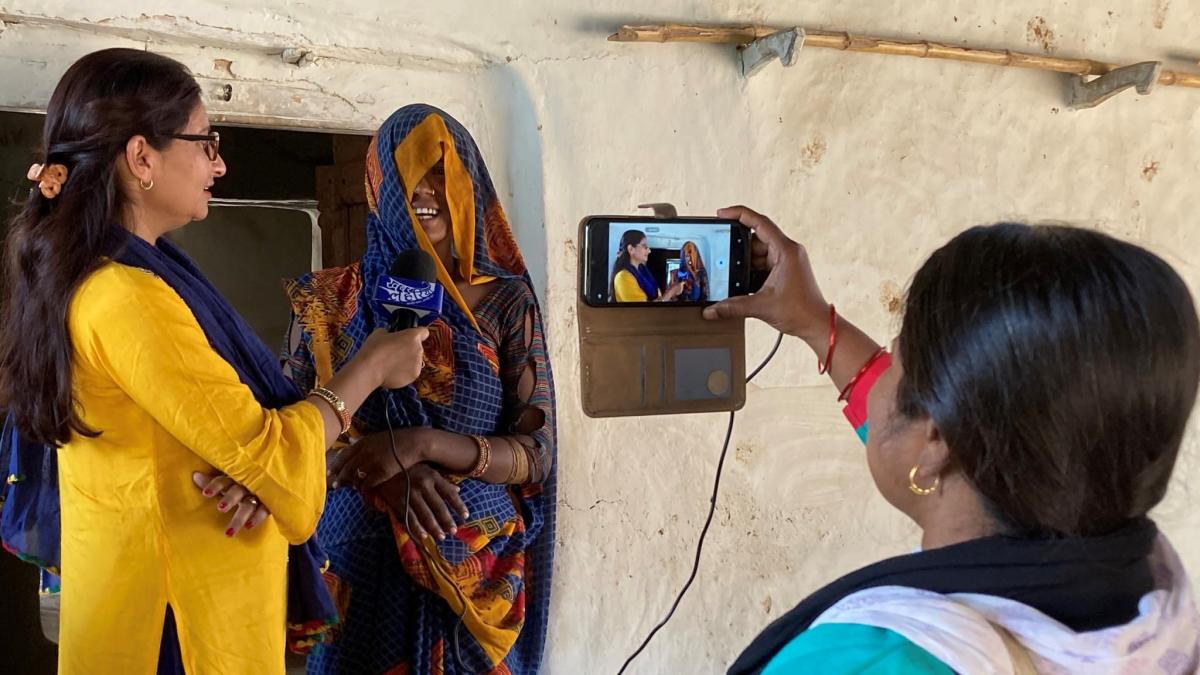 Jane Campion’s The Power of the Dog may top this year’s Oscars with 12 nominations, but India is under the spell of its own underdog story, vying for an Oscar in the feature film category documentaries.

Writing with Fire tells the extraordinary story of the fiery women of Khabar Lahariya – an all-female news service run primarily by editors and reporters from the most marginalized Dalit, Muslim and tribal communities.

The film, which premiered last year at the Sundance Film Festival where it won two awards, has yet to screen in India.

But the Oscar nomination and rave reviews from critics abroad – The Washington Post called it “perhaps the most inspiring journalism film of all time” – sparked interest at home.

Born 20 years ago as a single-sheet newspaper in the economically depressed region of Bundelkhand in the northern state of Uttar Pradesh, Khabar Lahariya – which translates to Waves of News – is now fully digital, with over half a million YouTube subscribers and 10 million average monthly views.

The documentary captures this transition from print to digital while following editor and film star Meera Devi and two of her reporters as they unbox their new smartphones, learn to use technology and challenge tradition at home and in the community.

Among its journalists are a former underage child, several child brides, survivors of abuse and domestic violence – all local women who have faced and continue to live with class, gender and caste discrimination. And the stories they tell are often informed by their lived experiences.

Coming at a time when journalism is in a state of flux in India with many high-profile journalists undoubtedly toeing the government line, the Oscar nomination for Writing with Fire shines a light on those women who dare to speak truth to power. , asking uncomfortable questions to the police. and patriarchal satraps.

But just a week before the awards show in Los Angeles on March 27, the media group distanced itself from the documentary, accusing the filmmakers of “twisting” its story – a charge the filmmakers have denied.

In a statement on their site, Khabar Lahariya said the film inaccurately showed their journalists focusing on the hardline Hindutva politics practiced by the state-ruling Bharatiya Janata Party and insisted that during two decades they had reported on many parties and “showed them the whole mirror when they didn’t do what they said”.

Srishti Mehra of Khabar Lahariya’s communications team told the BBC that “the film captures a pivotal moment in our 20-year journey and the Oscars are a big stage and it got us the attention of the whole world”.

“But this is only a small part of our journey. And partial stories sometimes tend to distort the whole.”

Away from the Oscars limelight, Ms Mehra said “it’s business as usual” for Khabar Lahariya journalists who are busy doing what they do best – leather journalism.

Last week, I accompanied Meera and senior reporter Nazni Rizvi as they traveled to a village about 50 km (31 miles) from their office in Banda, a riverside town 200 km from the capital of State, Lucknow, to investigate complaints of frequent power outages.

Two days ago, Meera had received a call from one of the villagers complaining of a breakdown. She tweeted, and within minutes authorities responded, even though it took 24 hours to restore power.

But the power goes out again, so the team goes there to find out what’s causing these frequent blackouts.

Temperatures hover around 37 degrees Celsius and when Meera and Nazni arrive in the village, they are surrounded by anxious locals, wondering how they would cope without electricity during the summer.

Lala Ram, who had called Meera, says he did so “because the officials don’t listen to us” and “no other media ever comes to talk to us”.

But for Meera and Nazni, these are important stories that need to be told.

“We also live in villages and face the same problems. But our problems are seen as too benign by the mainstream media,” Meera says, adding that “we speak for ourselves because no one else does. “.

Meera, who was hired in 2006, and Nazni, a year later, say they “fell into journalism” not motivated by lofty ideals to straighten out the world, but as a way to earn a living, to gain some freedom – and in Nazni’s case, to escape an abusive husband and nurture her young children.

But their jobs came with their own problems. Both child brides, “married at 13-14”, they had to fight with their families and society to be taken seriously.

“Bundelkhand is a place where women aren’t even allowed to talk to men, so people, including our families, couldn’t understand the fact that we kept such irregular hours and sometimes worked nights,” explains Meera.

And when they went out to interview people, “they didn’t take us seriously, they didn’t treat us like reporters.”

“Some men made obscene remarks, they asked if we were married and had children. Sometimes they asked us to come back in the evening. Some officials told us that we would be better off if we sold poppadum and pickles instead,” adds Nazni.

Their caste and religious identity also played a role – Meera is Dalit. Formerly known as the “untouchables”, the community languished for centuries at the bottom of a ruthless Hindu caste hierarchy. Nazni comes from the minority Muslim community that has been increasingly marginalized in India since the rise of Hindu nationalists in government.

But over the years, they say, their “problems have subsided” – and, reluctantly, their families are more accepting of their work. They also won several prestigious national and international awards, which brought them recognition and respectability and made Meera and her colleagues role models for the younger generation.

“Now the girls are saying they want to emulate us,” Meera says. “A job at Khabar Lahariya is now in high demand. Previously, families would try to discourage their daughters from joining us, but now they are asking us when a next position will become available.”

And what about the officials who earlier advised them to sell pickles?

“Now they try to avoid us because we have a reputation – they know we’re going to ask them tough questions,” she laughs.