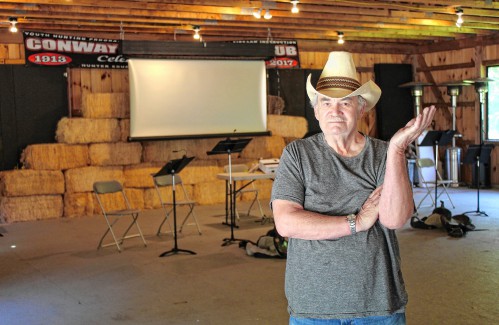 Between 7:00 p.m. and 8:30 p.m., people are invited to come to the club, located at 245 Elmer Road, and listen to several comedians tell American western stories written by authors Annie Proulx and Bret Harte.

“When was the last time you had a story read to you? said Mike Haley, Sportsman’s Club member and event organizer. “I’ve done Conway short stories before, and I’m tired of watching TV and seeing what happens and feeling so helpless.”

Haley organized the event to raise money for World Central Kitchen, a charity that provides meals to Ukrainians affected by the war with Russia.

Audiences will hear “The Mud Below” and “The Blood Bay” by Annie Proulx, as well as “A Yellow Dog,” a tale by Bret Harte about a mangy bastard in a frontier mining camp who finds his way to a better place.

However, it won’t just be someone sitting in a chair reading stories to the audience, as Haley is bringing in several actors from around the county to provide voices for each of the characters in the three stories.

“Wherever there is dialogue, I try to fit the readers into the character,” he said, adding that he was grateful that several actors were “willing and able to add flavor” to the stories. “We’re a small town and space is limited, but this place is brimming with talent.”

Snacks and soft drinks will be provided, but people can bring their own alcoholic drinks. Attendees will be encouraged to sit from a distance and although masks are not mandatory, they will be on hand for anyone wishing to wear one. Chairs are available, but participants are also welcome to bring their own lawn chairs.

Haley said he hoped people would show up and have fun, while providing relief – even if it was a small amount – to those who needed it.

“What’s an hour and a half to help us people who are so desperate?” I wish we could send more,” Haley said. “It’s also one thing to bring neighbors together.”