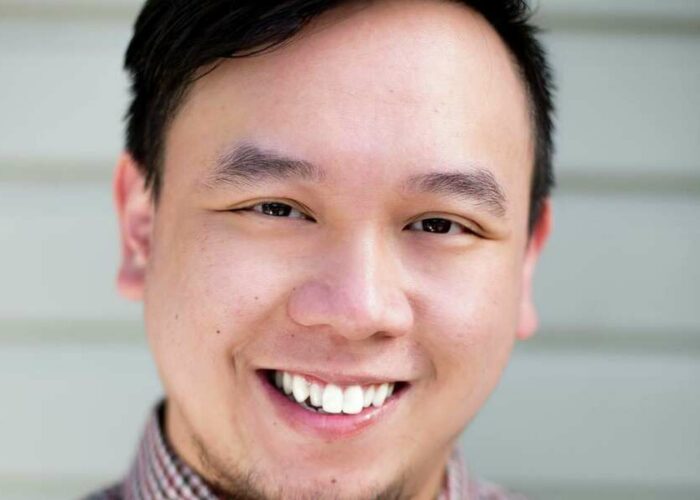 The first-generation Vietnamese-American sibling rivalry comes with a side of nems in Stages’ “Song of Me,” which begins previews May 27 and runs through June 12 at the Gordy Theater. .

The roots of the 90-minute one-act play date back some four years, when creators Mai Lê and Đạt Peter Tôn met during a series of artist-focused readings at BIPOC. After watching each other act, they vowed to work together as soon as possible. Meeting again at a similar event a year later, Lê pitched Tôn an idea for a solo show she had been developing. Both lamented the lack of on-stage representation of their culture.

“We both had a lot of ideas and feelings and such a great desire to see more of our stories on stage,” says Lê. “We didn’t feel like we saw a story that really resonated with us specifically.”

Lê’s brainchild involved a young woman dealing with the fallout of a tell-all book her mother had written before she passed away. When Tôn offered to collaborate — without a script, she notes, he was just as happy directing or acting as designer — they cropped it to capture two estranged siblings before breaking up. reconnect at an important time for both.

“What’s so great about our conversations, with developing this idea, is that we’ve had so much fun discussing our own stories and realizing that we have so much of that same trauma, and thank God we can laugh about it together.” say it.

“But because I’m a cis woman and Peter is a cis gay man, our experiences, as similar as they are, are also very, very different,” she adds. “So we wanted to expose a story that had both of our experiences, but through a sibling dynamic.”

Looking for a self-contained setting that would also allow for plenty of conversation, Lê and Tôn decided their characters were cooking something together. In this case, Philip (Tôn) invites big sister Luci (Lê) to help him make Vietnamese spring rolls on the eve of his wedding. “The whole concept of the show is about finding a boundary between their Vietnamese identity and their American identity, and seeing how that manifests differently in Lucy and in Philip,” says Tôn.

“I think in Philip he kind of embraced American culture more because growing up gay in a very traditional Vietnamese household is very difficult,” he continues. “Then you have Lucy, who is the older sister, and there’s a dynamic that plays into that – that she kind of has to take on the responsibilities of the family.”

“In Vietnamese culture, the eldest always has to shoulder a lot of the burden because she’s kind of a housekeeper, and she has a very tumultuous but now very strong relationship with her parents on the show,” adds Lê, a first-born herself.

“It’s kind of like this back and forth, almost like a battle between tradition versus modernity, Vietnamese versus American, and these two siblings definitely stand on one side or the other,” she says. .

Because the issues Luci and Philip are debating can be weighty, Lê and Tôn made sure to isolate the piece with a lot of humor. “I hope people will identify with the pain, but also find the humor that comes out of trauma, and how millennials deal with trauma through laughter,” Tôn says.

Lê adds: “I also think humor comes from seeing each other – seeing each other very, very sincerely, because no one can bother you, annoy you or bring you down like your brother or your sister can, so he there’s a very strong dynamic there.

Because Lê and Tôn will actually do spring rolls on stage during the play, the fried cylinders have almost become a character in their own right. The creators had to pay close attention to equipment and timing — not to mention making sure the spring rolls were cooked all the way through — but the confident “Song of Me” sound came out pretty good.

“You’re also going to hear us eating it, so hopefully if all goes well it’ll be a smell-o-sight theatre,” Lê says, “and then it’ll be quiet and you’re going to hear the actors crunch. in the egg roll and it will just be this very wonderful sound.

Chris Gray is a Galveston-based writer.