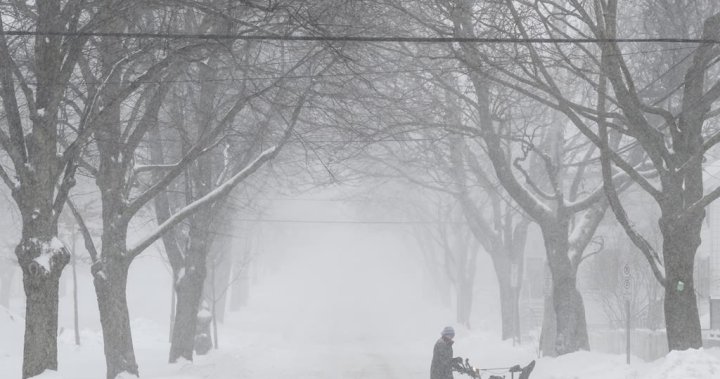 Residents pulled out shovels and plows to dig themselves out of mountains of snow, roads were impassable and some communities lost power due to the storm.

And according to Environment Canada, it looks like some regions will see the same thing this weekend.

Southeast Saskatchewan. being hit by another major spring snowstorm

Environment Canada says a low pressure system in Colorado will bring heavy snow, freezing rain and high winds to communities in southeast Saskatchewan. The southeast corner of the province was the hardest hit by weather conditions last week.

Total accumulations for this weekend’s storm are forecast at 25 to 50 cm on Saturday with northerly winds gusting to 80 km/h.

“Really very disorderly conditions are expected across much of the southeastern part of the province over the next 48 to 72 hours,” said Brian Proctor, meteorologist with Environment Canada.

“It’s going to be quite an interesting weather scenario, and the impact could be quite significant, I think, for a lot of parties there.

People in both urban and rural areas are bracing for the worst just over a week after receiving a heavy snowfall, according to forecasts.

It also means that farmers will again have to delay sowing operations in the affected areas.

“I think there will probably be some delays. I think last year we started sowing around April 27 or 28, so it will definitely be later than last year,” said Ian Boxall , president of the Agricultural Producers Association of Saskatchewan.

Boxall, who farms in northeast Saskatchewan in the Melfort region, said growers in parts of the Prairies were unable to plant due to snow.

However, while farmers in some areas will have to suspend operations due to the impending storm, he noted that some were looking forward to the additional rainfall.

“I think with last year’s drought, I think most growers are happy to see moisture of any kind. But it’s time for the weather to change and warm up so we can get out and work,” Boxall said.

He added that despite the stormy weather, it looks like the producers aren’t pushing the panic button yet.

“We have a few weeks before the panic sets in,” Boxall suggested. “I think we still have a little time to get organized and get our crop in the ground by the June 1st date.”