Opinion: Sasha’s story made me understand the war in Ukraine in a heartbreaking way 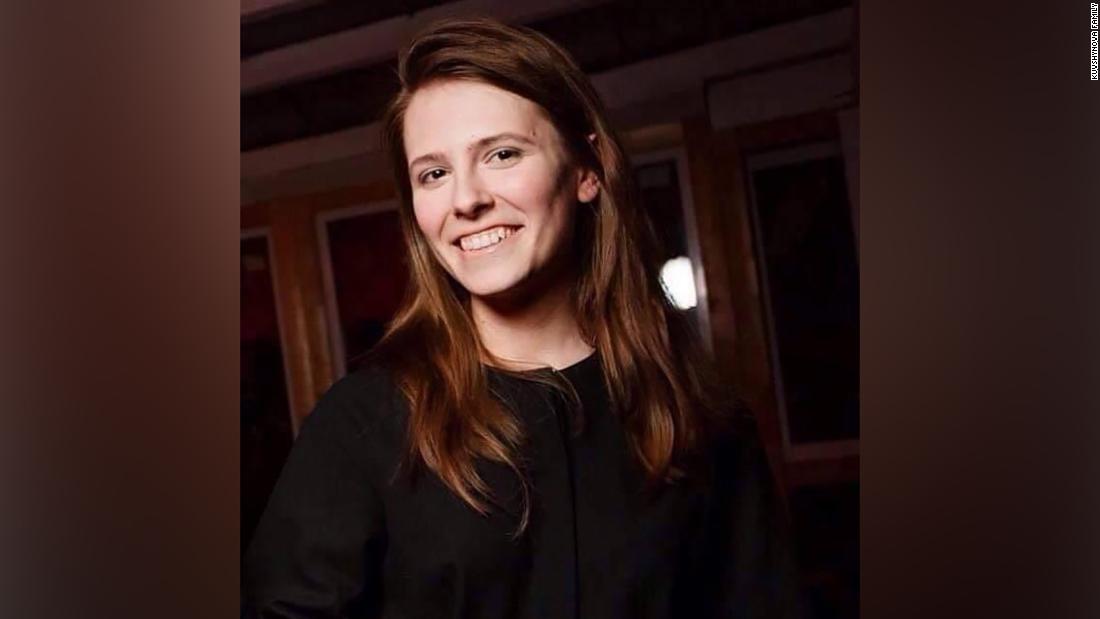 As a Ukrainian journalist working as a consultant for Fox News, she told me she was so busy and tired covering the Russian invasion that she could barely open her eyes in the morning.

She sent me a selfie that showed her wearing a helmet and body armor and updated me on her whereabouts. During our last conversation, Sasha had just managed to leave the town of Irpin, devastated by Russian attacks. She told me she was lucky to get out of town safe and sound.

Despite the danger she faced, she cracked a few jokes and sent me memes because “you can’t get away with it without humor,” as she once said.

Nine days later, on March 14, Sasha, along with Irish cameraman Pierre Zakrzewski, were killed when their vehicle came under fire in a kyiv suburb. Fox News correspondent Benjamin Hall was also injured in the attack.

When I first learned of his death, I couldn’t muster my strength. In the first hours, disbelief washed over me.

I wanted to pick up the phone and call her.

My mind was telling me a story I wanted to hear: I called her, and she laughed into the speakerphone and told me that everyone had made a mistake. We were arranging for coffee, and she was telling me about another escape, another encounter with Russian bombing in her quest to do what journalists do – bring history to the world.

But then reality returned, and I knew silence was all I would get on the other end.

Then came the questions. People kept calling, asking if I knew Sasha, and I realized I didn’t have a single bad word to say about her. She was bright, beautiful, smart, funny Sasha, who made films and loved poetry and cinema. She was always on the lookout for the facts, boldly joining the Fox News team to report from the front lines.

It was always nice to spend time with her – to do business or to have a glass of wine. To be fair around her. She was only 24 years old.

Before that, I never understood how people write memorials to their loved ones, but now it seems like the only way out.

It seems vital to me to capture the memories I have of Sasha: the woman I worked with on musical projects, with whom I drank wine in our favorite bars; the friend who inevitably became what all Ukrainian journalists must become today: a war reporter. And because of the war, that light has now disappeared.

As surreal as it may seem, writing about my friend’s death is only the last writing I’ve written about this war. Much of my professional life as a journalist has been chronicling Russia’s attacks on my people. I co-founded Stop Fake, a fact-checking organization that was launched in 2014, when the war in Ukraine was still confined to the east. More recently, I’ve gone from reporting on Russian troop buildups along the Ukrainian border to covering the daily deluge of war.

And Ukrainian journalists, like their foreign colleagues, work hard every day – in an environment that is becoming increasingly hostile – to ensure that the world has a clear picture of what is happening here.

Unfortunately, Sasha and Pierre were not the only journalists killed in this war. Yevhenii Sakun, a Ukrainian cameraman, died on March 1 when the kyiv TV tower was hit by Russian shelling. Brent Renaud, an American documentary filmmaker, was killed in a shooting that also injured journalist Juan Arredondo. Russian correspondent Oksana Baulina, who covered the war for an independent investigative news site, died in kyiv. And famed Ukrainian photojournalist Maks Levin was found dead Friday in a village north of kyiv, after being missing for more than two weeks, according to Ukrainian officials.
Sky News chief correspondent Stuart Ramsay also described how he and his team were attacked near kyiv on February 28. They were ambushed by a sabotaging Russian reconnaissance team, they were later told.

“It was professional, the bullets kept crashing into the car – they didn’t miss,” Ramsay said.

And then there are those who are held captive. Ukrainian journalist Victoria Roshchyna was detained by Russian forces in occupied Berdyansk before she was released. A Radio France fixer and interpreter was taken prisoner by Russian troops on March 5 and held for nine days, according to Reporters Without Borders (RSF). During this time, his car was machine-gunned and he was left in a freezing cellar, beaten with rifle butts and steel bars, repeatedly tortured with a knife and electric shocks and subjected to a mock execution and starvation for 48 hours, RSF reported.
In a number of cases, it appears the Russians are deliberately targeting journalists, as the AP’s Mstyslav Chernov has chillingly recounted from Mariupol.
As an adviser to the mayor of Mariupol told me, the Russians may be continuously bombing the city in part to prevent people – including journalists – from coming out to document what is happening and share it. Meanwhile, Secretary of State Antony Blinken said the United States is “looking very carefully” at whether Russia deliberately targets journalists, he told NPR two weeks ago.

This war has been going on for over a month now, and the terrifying, dreadful and sickening dances all around us. For Ukrainians, we’ve already had a front-row seat to over 800 hours of horror, with no end in sight. We don’t know when an attack will hit the places we love and remember – the cafes where we gathered with friends, the corners where we had our first kisses, or the parks where we played as children.

All the scary stories and horror movies we once consumed now seem harmless, fading away in the presence of this true horror: what one human being can do to another.

In the weeks leading up to Sasha’s death, everything seemed surreal. That’s exactly what your brain does: it pretends that all of this isn’t quite real.

You know it. But you can’t believe it either. There is a threshold, and it protects you.

It’s like there’s a thin glass between you and this huge, overwhelming pain. It’s still there — you can see the wave of devastation, ready to swallow you, but it’s slightly distant. If you reach out, it’s almost like you can touch what’s really going on.

But the glass still holds him back and the overwhelming feelings stay at bay.

And it works pretty well.

Until the death of your loved one.

The denial is strong, like a thought so painful that my mind doesn’t allow itself to follow it through.

I know the rage will come too.

Somewhere there will be more sorrow.

And then acceptance will come.

But I know that the emptiness I feel – the emptiness where Sasha was – as well as the feeling that this should never have happened, neither here nor anywhere else – that feeling will never go away.

And for that I can never forgive – because not only did Sasha die, but that thin glass that protected me shattered.

My brain can no longer protect me. As if that could not protect all those who mourn their loved ones killed in this war that Russia has started in Ukraine.

This belief in the good of mankind cannot be restored like you restore buildings. It also cannot be rebuilt as Italy plans to rebuild the Mariupol Drama Theater.

I can’t bring Sasha back.

At the end of our last conversation, she told me how tired she was and that she just wanted some pancakes.

A little later she wrote: “You won’t believe. I came down for breakfast — and here they are! Pancakes! She wrote as she smiled like a happy child for the rest of the day.

When I heard that she had been killed, my first strange thought was: this place where she is right now – whether it’s heaven or Valhalla – better have some damn good pancakes.

Sasha died trying to show the world the truth about what happens every day in Ukraine. And while his job is done, it’s now up to us to keep the fight going.