Only the 9: Two Ukrainians tell their story 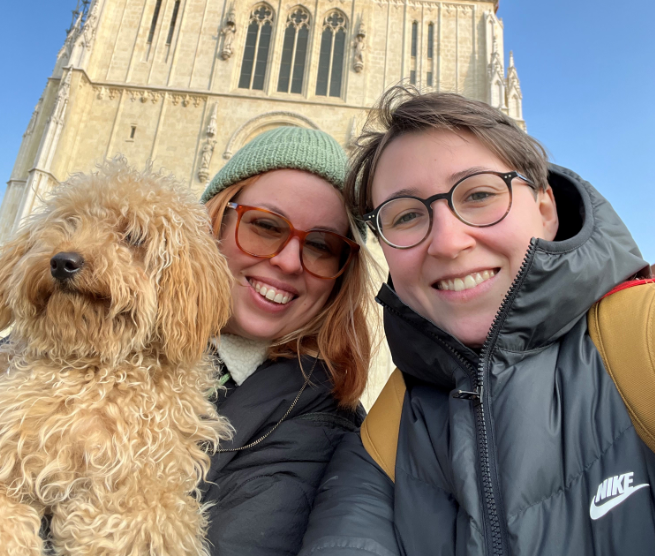 EL PASO, Texas (KTSM) — Anastasia Vishnyakova and Iana Guselnykova and their dog Cuba traveled to Zagreb, Croatia as war progressed in Kharkiv. They are now restarting their business to help their fellow Ukrainians.

Iana was in Rome, Italy, having left just two days before the attack for a quick visit.

A call came from Anastasia saying she could hear the bombs coming from somewhere on the outskirts of Kharkiv, a town in northeastern Ukraine on the border with Russia where she and Iana live and work.

Just before Iana left for Rome, they talked about moving west because talk of Russian attacks had been in the headlines for several months at that time.

After Iana was supposed to return, they would pack up and leave, however, it didn’t go exactly as planned.

On the first day of the attack, Anastasia left her apartment which is near Kharkiv airport, which Iana warned her about, saying he might be the target of attacks.

At first, Anastasia says, she couldn’t grasp the gravity of the situation. She always thought about delivering their ceramic plates that they sell on time.

Once she noticed that the post office had closed for the day and possibly an unpredictable future, that’s when reality came knocking, or in this case, bombarding the door.

“I don’t know how you can describe that feeling when you know the war has started,” Iana said during the interview.

For her, it was difficult to be so far from her companion, her dog and her home, but she had the ability to coordinate the evacuation of Anastasia and that’s all that mattered, to bring her as far west as quickly as possible.

The first night Anastasia spent at the bomb-proof subway station. She describes it as a traumatic experience.

With the curfew starting at 10 p.m., she had to wait until the next morning to get to their workspace and rest.

Iana booked all the train tickets for that day to make sure Anastasia got to one of them.

After taking a nap in the workshop, Anastasia headed for the station.

She said that at that time finding a taxi was almost impossible and the prices rose rapidly.

Along with another friend and her dog, she walked to the station as bombs started falling along the way.

They hid in a nearby church and waited for it to stop. By then, she described, she could already recognize different military vehicles, different rockets, bombs and shelling.

Not something she hoped would be part of her general knowledge.

Arriving at the station was the culmination of all the stressful events she had encountered at that time.

Trains barely came and went, people jostled and some even became aggressive, she described.

It was a change for the survival instinct and for her – a feeling of hopelessness.

“They just start bombing somewhere near the station. So people started to panic. It was the first time I was really depressed and I just started crying. I called Iana and said, oh my god, I have no idea how to escape, how to evacuate,” she said.

After five long hours of waiting, she never boarded a train.

She continued on to a friend’s apartment, further from the area where shelling was reported.

“I needed to sleep, eat and relax for a day,” she said.

On the second day, she was finally able to evacuate by bus.

Iana, being all the way to Italy, managed to contact many people through social networks and get Anastasia to come and get her on a bus to Lviv, five days after she started her evacuation.

“People understood that they had to help each other. It was like a net between everyone,” Iana said.

It was 24 hours of non-stop driving until Anastasia was finally in Lviv.

She crossed the Hungarian border and traveled to Zagreb, Croatia, where a family friend offered to put them up in an apartment.

After a train ride from Budapest, Hungary to Zagreb finally felt safe.

It was March 2 and Iana joined her on March 6.

Since then, they have continued to help friends, family and anyone requesting evacuation.

Iana explained that social media has been a crucial tool in coordinating evacuations.

“Even if you help, it doesn’t seem like enough,” Iana said.

So far, they have made many contacts with local artists who will help them provide the space and materials needed to make their ceramic plates.

Once they are able to manufacture these, they will start shipping all orders, which they hope will be soon.

By helping from a distance and following current events in Ukraine, they want to share horror stories, the ones that changed the lives of Ukrainians forever.

One was their friend who had taken refuge with her parents and dogs in their basement when her mother was hit in a bomb attack.

“She was hit by a piece of bomb and they tried to evacuate her, but the Russians wouldn’t let her evacuate with her mother. They called the ambulance, but they didn’t come, and the next day Mom died. They had to stay with their mother in the same place for three more days,” Iana recounted, saying her friend has since been evacuated but is now scarred for life.

Anastasia was born and raised in Moscow before moving to Ukraine, but she no longer feels close to her home country.

“I was born in Russia but in my soul I’m really a Ukrainian now,” she said.

Many of his friendships have collapsed since the attacks. She described losing connection with her Russian friends whom she has known for years because it seems they live in different worlds.

‘They just don’t live in reality because Russian propaganda works pretty well,’ she explained and said even her father didn’t believe her on the phone she evacuated as bombs fell. around her.

Although she partly blames the Russian people who she said could have stopped Putin’s regime, she understands that not all Russians support government decisions.

With all the hardships they have faced and are facing right now, maintaining their business and their positivity gives them a glimmer of hope that their country will persevere.