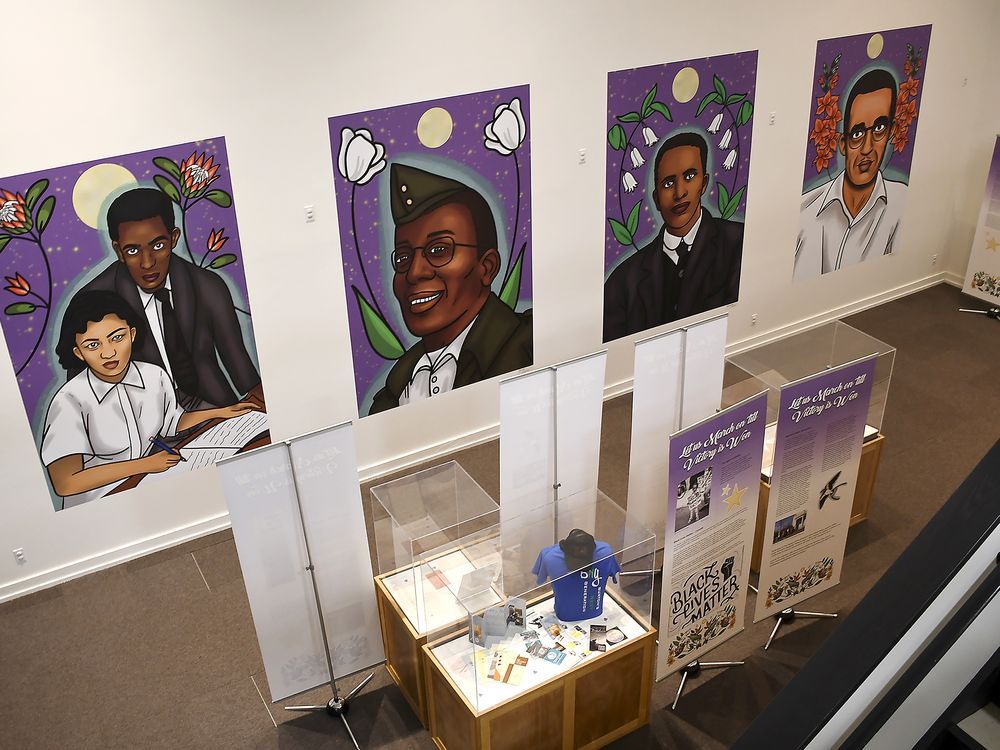 With a family connection to her subject, a local artist was able to show her gratitude by creating portraits of members of the National Unity Association.

Mariah Alexander designed the artwork for an exhibit on the association, which is currently on display at the Chatham-Kent Museum. The artist, who grew up in North Buxton and now lives on Walpole Island First Nation, is a great-granddaughter of the association’s founding member, Arthur H. Alexander.

The association fought against segregation in Chatham-Kent in the 1940s and 1950s, when people of color could be denied service in restaurants and other businesses. Their work, along with the help of other organizations, led to the passage of the Fair Housing Practices Act in Ontario in 1954.

“I really wanted to make sure I made them beautiful and vibrant…even though it’s on such a heavy topic,” said Alexander, 24. “I’m very proud of what they’ve done and they should be too.”

JThe artist said she heard the story of the association throughout her life from her father, Spencer, who was assistant curator at Buxton National Historic Site and Museum.

“We have a journal from my great-grandfather who was part of the National Unity Association, and he (Spencer) read these excerpts to me from a very young age,” Alexander said. “I was always asking follow-up questions as I got older too to try and remember because I think it’s really important to know your story.”

Alexander is also close to the family of Blair Newby, the museum’s programs coordinator for Chatham-Kent, and they have shared stories with her.

Her subjects for the exhibit included her great-grandfather, Hugh Burnett of the National Unity Association and others who fought against discrimination, such as Alvin Ladd, Ruth Lor and Bromley Armstrong.

The exhibit begins with the background to the founding of the colonies of Dawn and Elgin and the black population of Chatham in the 1800s. For this section, Alexander has created portraits of Josiah Henson, Abraham Dora Shadd and Mary Ann Shadd Carey.

The exhibition concludes with a group portrait of the members of Buxton’s Next Generation, a recent group that strives to create a sense of community in their area.

Alexander created these portraits with the Procreate app on his iPad and each piece took between 10 and 20 hours.

“I’m a fan of bright colors and complementary colors and I always include a floral element in my designs,” she said. “Each flower in each portrait has a different meaning.”

For example, the Flower of Solomon’s Seal for Arthur H. Alexander represents peace and wisdom while the Bird of Paradise for Mary Ann Shadd Cary symbolizes the idea of ​​peace on earth, freedom and excellence, a- she declared.

Alexander said she also used a hydrangea flower for the display to show her gratitude to the National Unity Association.

The portraits are presented on a large scale for the exhibition. The artist said she focused on facial expressions and eyes so people could feel the portraits looking at them when they see them in person.

“I want them to feel very alive and very with you in that moment,” she said.

Newby said assistant curator Lydia Burggraaf came up with the idea of ​​having Alexander contribute to the exhibition after seeing some of his portraits.

“Our current exhibits that we’re trying to do are more interactive, but because of the subject matter, we knew it couldn’t be interactive,” Newby said. “We always wanted it to have a huge impact.”

Newby provided Alexander with photos of all subjects. Since most of them were black and white, they found descendants of each person “to determine where their tones might be,” Alexander said.

“I love to imagine my ancestors watching me and following this journey of our family,” she said. “I just needed to paint them in the best possible light.”

To book a tour or view the virtual exhibit, visit www.chatham-kent.ca/ckmuseum.