Kishida pushes to revise outdated parts of the Constitution 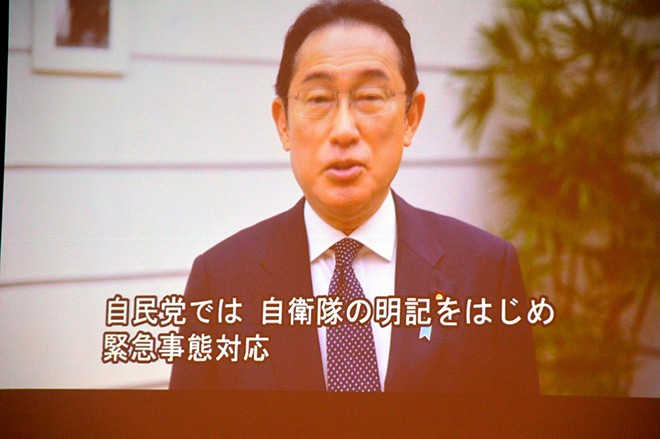 Prime Minister Fumio Kishida has called for revisions to make the Constitution better reflect current times, including changes that would strengthen the government’s response to emergencies.

Kishida appeared in a video message played at a rally by a group pushing for constitutional review on May 3, which was Constitution Day, a public holiday.

Although Kishida said changing the Constitution would not be an easy task, he stressed that attempts to change it must continue.

The War Renunciation Constitution has never been revised since its enactment after World War II.

Highlighting the Russian invasion of Ukraine as well as the new coronavirus pandemic, Kishida spoke of the importance of adding a provision to the Constitution to deal with major emergencies.

He also called for the swift adoption of four amendments proposed by the ruling Liberal Democratic Party, including a clear legal definition of the status of the Self-Defense Forces.

Kishida welcomed the ongoing debate on the Constitution in the committees of both Houses of the Diet, but added: “The major player in the constitutional review is the general public. We still need to build momentum for such a review.

Constitutional revisions require the approval of two-thirds of the Diet’s members, as well as the public support of a majority in a national referendum.

Attending the rally were lawmakers from parties keen to revise the Constitution, such as the LDP, junior coalition partner Komeito, Nippon Ishin (Japan Innovation Party) and the People’s Democratic Party.

Kishida’s predecessors, Yoshihide Suga and Shinzo Abe, have delivered video messages at past rallies sponsored by the same group on Constitution Day.

Other lawmakers from opposition parties attended another rally organized by groups that oppose revisions to the pacifist constitution.

Soichiro Okuno, of the main opposition Constitutional Democratic Party of Japan, has called for cooperation among opposition parties in this summer’s Upper House elections to prevent elements favoring the revision of the Constitution to obtain two-thirds of the seats in this chamber.