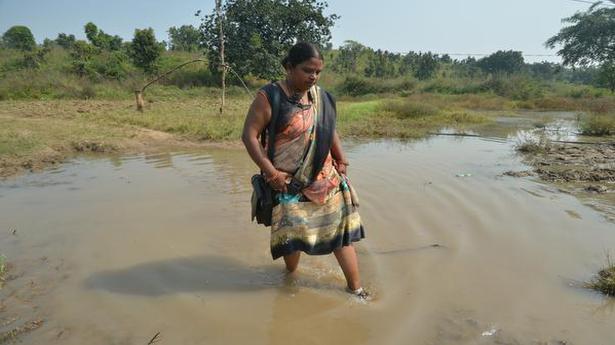 As a documentary on the Khabar Lahariya news network heads to the Oscars, we take a look at a few news networks that deal with the most neglected areas of rural India.

Winter is setting in and the pilgrimage center on the border of Uttar Pradesh and Madhya Pradesh has yet to wake up when Sunita and I set out for the village of Gadhchapa in Uttar Pradesh. Sunita, journalist with Khabar Lahariya, a multilingual information network run by rural women journalists, traveled an hour by bus from his house in the village of Kol Majra to reach the town of Karwi. She seems comfortable in her sari, a thin dupatta on the shoulders and a pair of flat slippers. Her hair is oiled, parted in the middle and braided on both sides. She wears a shiny vermilion bindi on his forehead.

After an hour on muddy roads, we reach the Manikpur block and the vehicle comes to a stop as the kaccha the path ends and the jungle begins. “There is no way to reach Badehar Majra [part of Gadhchapa village] other than walking in the jungle, ”said Sunita, smiling at me. She was here two months ago to cover the story of a pregnant woman whose child was stillborn; she had been carried up the hill by four men in a hand-made car as no ambulance could reach the village.

All around us are tall trees and rocky slopes. As Sunita and I are walking, we meet a couple carrying a bicycle. The man is wearing ripped blue pajamas, a blue t-shirt and a pair of sandals at least two sizes too large. His left foot is bruised and bloody. His wife is barefoot, the end of her sari covers her face.

Mangal and Meera, they introduce themselves. Sunita asks if they are from Badehar Majra. Yes, they say. Sunita takes out her smartphone, plugs a small microphone into it, then attaches a mouthpiece to Mangal’s t-shirt. She begins her interview.

No school, no roads

In Uttar Pradesh, whose Chief Minister Yogi Adityanath was extremely vocal about the multifaceted development that took place under his leadership, there is a village without basic amenities: no school, no public health center, no roads. And Sunita is here to talk about it.

“Padhai kiye hain (Did you study?) ”Sunita asks. “Jab yahan school hi nahin hai at kya padhai karenge (When there is no school here, how can I study?) », Answers Mangal.

For the next 45 minutes, we all walk together, until we reach Majra. Sunita is a familiar face in the village. As soon as she arrives, the women greet her and Sunita begins her video interviews one by one, speaking in Bundeli Hindi.

When it’s all over and we get to town, Sunita is about to board her bus, but before that she has to open her office group chatbox and send her video interviews. These will then be edited by a team in Delhi, and finally uploaded to the Khabar Lahariya website. There are about 20 women like Sunita: Dalit, tribal, Muslim and other backward castes, who are part of Khabar Lahariyathe reporting team in 13 districts of Uttar Pradesh and Madhya Pradesh. The press organ is the subject of a documentary Write with fire, which just entered the 2022 Oscars shortlist.

Khabar Lahariya, once printed and now digital, is a rural information network that publishes “everyday stories of ordinary people in areas which are completely out of the media attention”. According to Kavita Devi, its co-founder, “The main objective was to set up an all-female information platform, particularly employing women from marginalized backgrounds. At first, people didn’t take us seriously. They could not accept the idea of ​​Dalit women working as journalists. But when we released our first edition of print newspapers, people were happy to read the reports from their villages printed in their dialect.

When rural communities make their voices and struggles heard, they are able to receive the right kind of help, thanks to social media. | Photo credit: BLACK TICKET FILMS

Khabar Lahariya is part of a group of media and organizations – including the Gaon connection, People’s Archive of Rural India (PARI) and Lantern Marathi – which report on the most despicably neglected areas of rural India where most journalists do not walk. In addition, these media also empower journalists themselves, many of whom come from poor and backward families. Sunita lives in a mud house, like the villagers she interviewed in Badehar. But her living conditions are much better than before she joined Khabar Lahariya.

Married as a teenager, she was a day laborer until she joined a women’s support group and, finally, Khabar Lahariya in 2011. After the death of her first husband, she remarried in 2019, and now her husband often leaves her to work. Until then, she remembers walking 8 km every day to reach the bus stop. For her reporting work, she says, “to reach some villages, I have to take a bus first, then a car, then another bus, and then walk. But these stories need to be told.

In 2015, Khabar Lahariya moved away from printing and went fully digital because printing turned out to be unsustainable. Hosted by Chambal Media, it operates using funds generated by projects including documentaries, social media campaigns and content collaborations they have with different NGOs and news organizations.

Parth MN, 29, is a freelance journalist based in Mumbai and has been working in the Maharashtra countryside since 2017 after receiving a scholarship from PARI. He realized that few people were doing this – unless there had been an event like the migrant exodus or the Hathras rape case. “It’s unfortunate that something has to happen for us to get to know the hinterland. The migrant crisis was an example of how the media covers an event and overlooks it when the story has grown old, ”he says.

Parth thinks it’s important to report on how Adivasis and Dalits live – there are places where even access to water is a task. Freelancing and reporting on these stories isn’t easy because there aren’t many takers, he says, except for a handful of organizations. “And those who are ready to publish don’t have enough funds.” But the work clearly compensates. “I find it easier to report on rural India because the stories are so harsh and compelling,” he says.

When rural communities make their voices and struggles heard, they are able to receive the right kind of help, thanks to social media. Parth reported on a journalist, whose monthly income was 4,000 yen, died of COVID-19 in Osmanabad; the hospital bill was ₹ 4 lakh. The journalist’s wife was in debt; but after the story was reported and shared on social media, dozens of people stepped forward to help her foot the bill.

Ravindra Keskar, 49, who worked as a journalist in Osmanabad for 13 years, recently resigned to start a digital platform called Lantern Marathi. He believes that although almost every village in the country has a smartphone, they do not have access to information in a language they understand. Keskar’s videos are an attempt to bring international and national news to the people of rural Maharashtra.

According to veteran journalist P. Sainath, founding editor-in-chief of PARI, “The average national Indian daily newspaper devotes 0.67% of its front page to news of rural origin, which means 69% of the population gets 0.67 % of the front page of national dailies. According to Sainath, all the stories of rural India, including those on the environment and agriculture, put together “do not have the same place as crime and entertainment. Many dailies do not have a journalist dedicated to work or the countryside.

PARI has a core team of 10, which includes journalists on monthly fees and PARI fellows. They also use an extensive network of freelance journalists in addition to a team of translators. Editor-in-chief Namita Waikar said the platform translates the stories into 13 languages ​​and plans to increase that figure soon.

For Sunita and the other reporters of Khabar Lahariya, it has been a long and difficult learning curve. First, they mastered the paper medium, then they had to learn digital reporting. Initially, Sunita remembers, she groped while giving a song to the camera. When he was offered a smartphone in 2015, when Khabar Lahariya went digital, she didn’t know how to use it. The organization has trained its staff and workshops have been held over the years on how to do live reporting for social media.

According to Kavita Devi, the platform will begin reporting on Bihar and nine new districts of the UP and MP this year. “We are also working on the Chhattisgarh,” she said. In addition to this, Chambal Media launched the Chambal Academy last year to train young rural women in mobile journalism, audio and video production and other digital reporting tools.

“I remember three years ago I didn’t know how to stop recording,” recalls Sunita. “The camera remained on even after the interview was over! Now I’m fine, ”she said confidently.