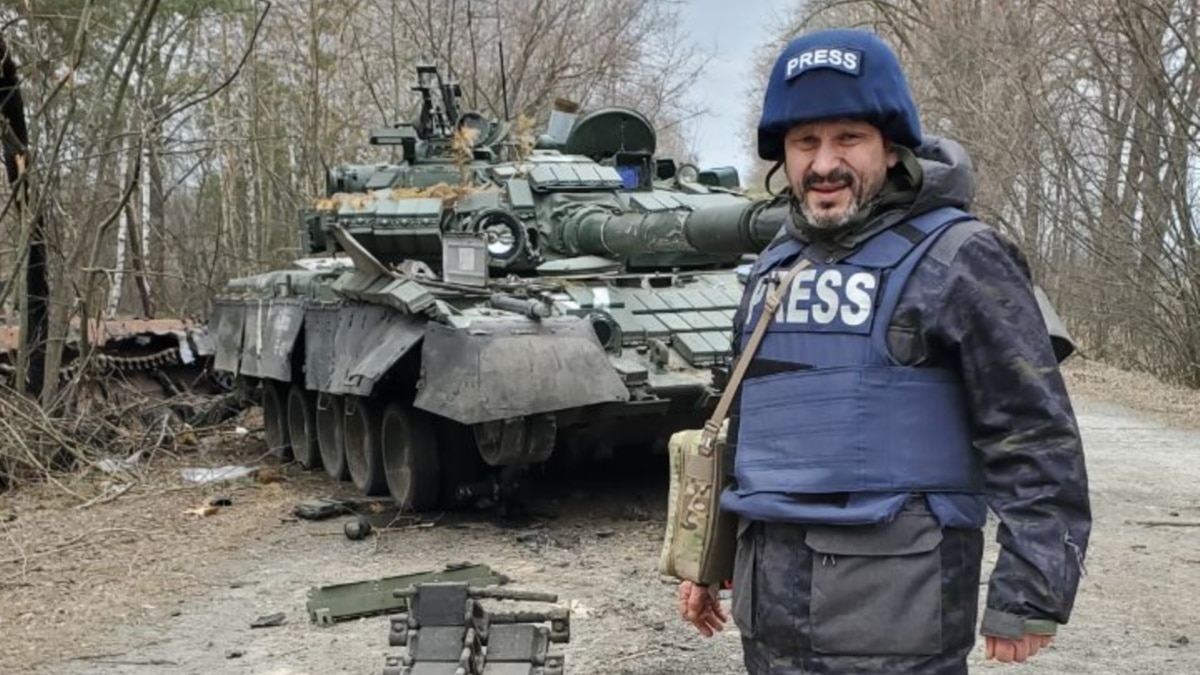 As Russia’s war in Ukraine enters its third month and details of the atrocities mount, journalists covering the conflict are taking a more cautious approach.

Several journalists – foreign and Ukrainian – have been killed since February 24, and dozens more have been injured either by incoming fire or by bullets while on assignment, according to media groups including the International Press Institute, or IPI.

According to the National Union of Journalists of Ukraine, up to 20 reporters could have been killed, a figure that includes victims whose circumstances of death have not been determined.

For those who have experienced near-misses, like Andriy Tsaplienko, the dangers of this conflict make them reassess their approach.

Tsaplienko, a correspondent for Ukrainian news channel 1+1, was hit by shrapnel on March 25 while covering a humanitarian corridor near the northern city of Chernihiv.

Speaking to VOA from Kyiv, Tsaplienko said he had “become more cautious, because a dead journalist is useless”.

Getting the story for reporters is the most important part of the job, but to do that they have to stay alive, he said.

“What I realized was that the approach to filming stories should be different under war conditions,” he said. “A journalist should not only be careful, but also fast, as quickly as possible during filming and move much faster.”

Advice for the injured

Tsaplienko said he didn’t stay in the hospital long enough for his injuries to fully heal.

And because of that, he has advice for fellow journalists injured in the Russian attacks: “Your life is more important than your story.

“I highly recommend getting well, getting fit and only then going back to work,” he said.

The nature of the reports has also changed.

“In the beginning, most of us were just reporting on what was happening on different front lines and the movement of Russian forces, but as Russia carried out more attacks, we focused more on this. Russian troops had done against Ukrainian civilians,” said Dima Replianchuk, a journalist with the Slidstvoa team of independent journalists.

The investigative reporting website, along with other local and international organizations, has collected evidence in places such as the town of Bucha, near the capital, kyiv, which Russian forces have occupied for more than a month.

The International Criminal Court (ICC) in The Hague has opened an investigation into alleged war crimes committed in Ukraine. And rights groups such as Human Rights Watch and Amnesty International are on the ground, working to collect evidence of alleged crimes.

According to Ukrainian officials, at least 400 bodies were found in Bucha after Russian troops withdrew.

“That’s something we didn’t have to work on in the early days of the invasion because it was still happening and we didn’t know what was going on in those Russian-occupied places,” he said. Replianchuk at VOA.

But now, he says, a lot of work needs to be done.

“Take Mariupol, for example,” said the 27-year-old Ukrainian journalist, “the civilians who fled the city are still in shock, but we have a duty to interview them to document what they witnessed in the city. “.

Others, like Rola Alkhatib, who arrived in Ukraine just over a week ago, are trying to assess the situation on the ground.

“kyiv seems safe for now, but the problem is that the situation is so fluid that we don’t know what is safe and what is dangerous,” said Alkhatib, Lebanese correspondent for the Al-Arabiya-funded TV channel. by Saudi Arabia.

“I would like to go to eastern Ukraine and report there, although I know it’s very dangerous for journalists and everyone else to be there,” she said. declared.

Russian forces withdrew from certain areas to concentrate on controlling eastern Ukraine, stepping up their bombardment campaign of the beleaguered port city of Mariupol. Ukrainian officials expect further Russian attacks in the east of the country.

In Russia, authorities have sought complete control over news coverage, issuing laws and guidelines for local media on how to cover the war and forcing the few remaining independent media to close or go into exile.

The Russian investigative news site Agentstvo estimates that more than 150 journalists have left Russia since the end of February. The government last week announced strict visa rules for foreign media entering the country.

Yevgeny Ivanov, Russia’s deputy foreign minister, said the move followed moves by the European Union and other countries to make it more difficult for Russian businesses to obtain visas.

“We reacted by making it more difficult for journalists from hostile countries to obtain visas,” he said. “They will now get a single-entry visa and pay higher visa fees.”

The country’s media regulator, Roskomnadzor, has blocked access to numerous news networks, including Russia’s VOA service, the BBC and others.

In March, Moscow passed a law that carries a 15-year prison sentence for those who spread what it considers fake news about the military. Authorities have already charged journalists and activists under the law.

The use of Virtual Private Network, or VPN, and other approaches, including shortwave, are in play, however, in an attempt to counter these blockages. For example, Paris-based Reporters Without Borders, or RSF, has given mirror sites to several blocked news sites in Russia to keep access to information flowing. Mirror sites are copies of original websites that are used through some VPN services to circumvent blocking and censorship.

Certain information contained in this report comes from Reuters.