In the townhouse of an artist and cabinetmaker 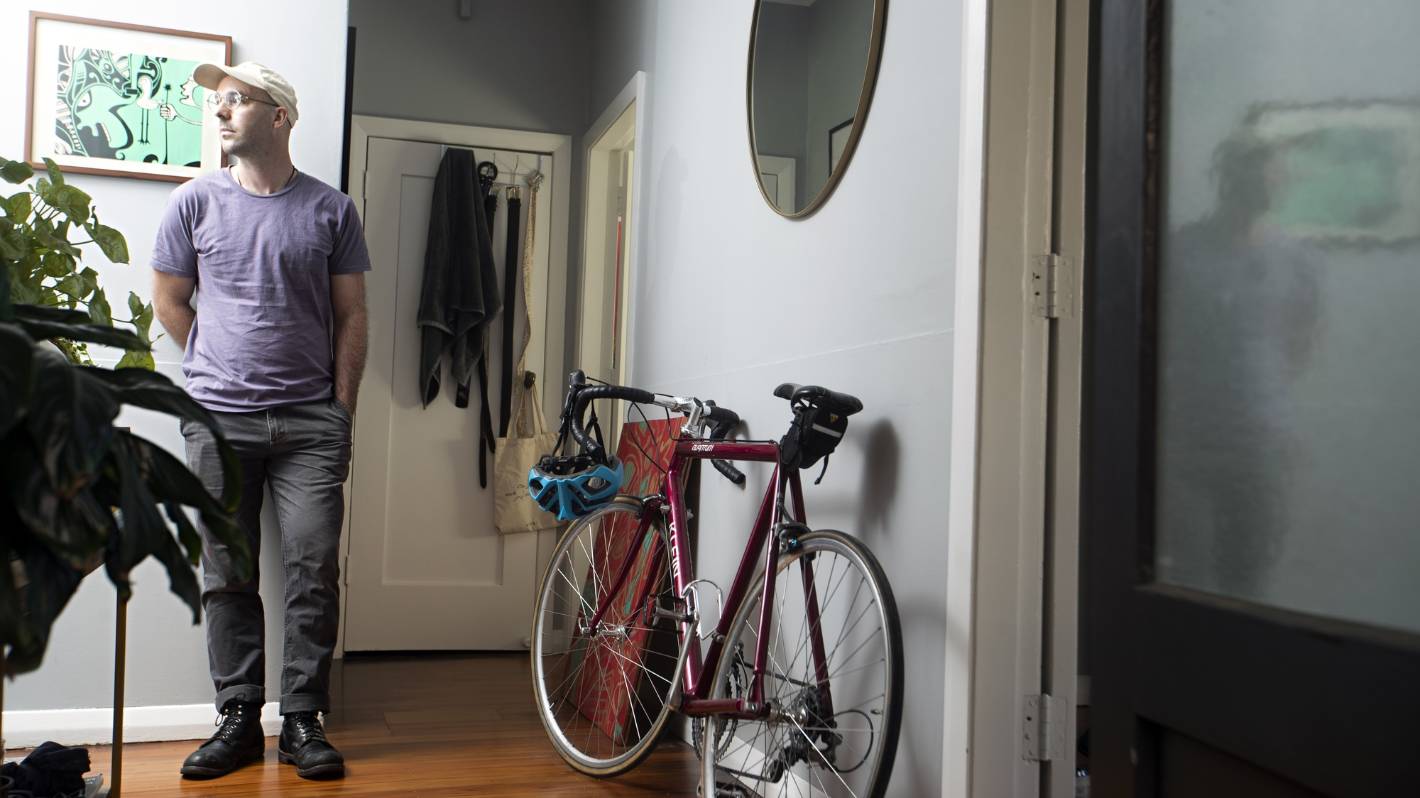 “The bike is a new purchase, and it’s great for getting around town and exercising without having to exercise,” says Isaac Trebilco.

Artist, curator and furniture maker Isaac Trebilco lives in a rented cottage at Gray Lynn in Auckland with his wife Christie Putwain, a nurse, and their housemate and friend, Carl Henderson.

ISAAC TREBILCO: We have been renting this place for about eight months. One of the things I loved was that I could make a studio in the garage. I have a desk there, and I don’t have to put it away every time I work, I can leave everything behind so I can sit down and come back to it easily.

I don’t earn my living as an artist. I work as a furniture maker. I’ve been doing it for about six months and learned a lot of new skills – it’s quite creative. Before that, I worked as a gardener.

Work is only about four miles away and I cycle there if I can. My bike is a relatively new thing – I’ve only had it for about six months. It’s a great way to get moving and exercise.

READ MORE:
* At home with Bailey Meredith, co-founder of Baina and General Sleep
* At home with a journalist traveling the world
* Home, sustainable home: Gary Marshall’s “happy place” is in a car-free rental building

Art has always been part of my family. I have three sisters and all of them are interested in art. And dad is a musician.

I have always done things; in high school, I did designs for T-shirts. Then I studied graphic design at AUT.

I love music and I love vinyl. I like the fact that you put on an album and listen to the whole thing. Probably my favorite album I own is To go up by Herb Alpert. But I have a fairly mixed collection ranging from jazz, funk, disco, country and hip-hop.

My wife bought me the guitar as a gift. I love having it in the living room and having a clutter. I don’t play well – it’s not something I sit down and work on. But I like to play blues riffs, that kind of thing.

I lack a lot of discipline when it comes to music, but I’m pretty good when it comes to art. If I’m working on a painting, I’ll try to work until 11 p.m. I come home and enter the studio. It’s the only way to get the job done – just go sit down and do it.

My wife and I lived in Warburton, Australia for two years. It’s about 12 hours from Alice Springs – about as far as it gets. It was an incredible experience. It was probably one of the defining experiences of my life, I would say.

I saw a completely different side of the world than I had ever known – the poverty and suffering that people go through. I grew up in Papakura (South Auckland) so I had seen poverty. But it was different.

We also lived in the UK. I worked as a gallery owner and that’s where I had my first exhibition. It was nerve wracking and I think I learned a lot about why I create work and what I mean.

I went to Ihumātao before the big protests started. There was a discussion about art there and Pania Newton took a hīkoi around the earth. Then I asked to meet her and see if I could do some artwork.

The process is quite specific. I start by taking a photo of ahi kā and members of the #ProtectIhumātao campaign that Pania introduces me to. I then draw over it digitally and create layers of shading before doing an outline on wood.

My surname has its roots in the south of England, but I was born and raised in New Zealand. I would say that I identify with Pākehā, but I also like the term Tangata Tiriti because it evokes the Treaty and our obligations under it.

Recently, I also participated in the curation of the pop-up gallery Toi Onehunga. Local artists around Onehunga applied, and we picked a group and exhibited them.

I like the conservation elements. I spent two years working as a gallery owner in the UK. I just like looking at the art, really, and helping the artists decide which pieces to show. I guess it helps to have a critical eye because when I was studying graphic design, critiquing your own work was part of the process.

I also did a piece for the Whales Tales Art Trail in Auckland this year. It’s a fundraiser for the World Wide Fund for Nature, so it’s a good cause.

The ephemeral gallery Toi Onehunga is open until May 1. Works by Isaac Trebilco and many other local artists are on display.