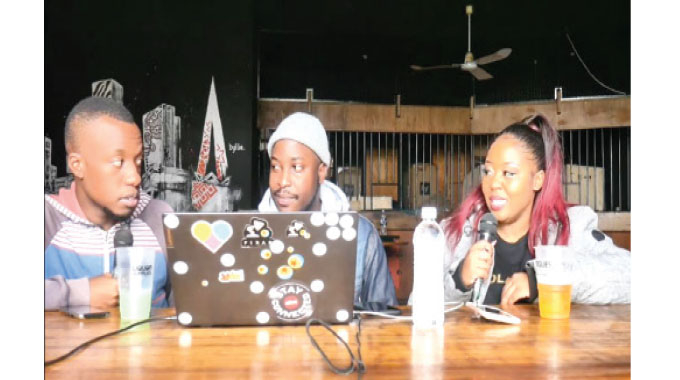 Bongani Ndlovu, columnist
The YouTube video sharing site has opened up the world to many people and local YouTubers are telling Zimbabwe’s story through this medium.

All over the world, there has been an increase in YouTubers, defined as someone who produces videos on the YouTube video-sharing platform.

Oum Walid specializes in introducing its viewers to the best cooking recipes and simple cooking techniques for beginners and women. Every month, the revenue generated by this channel is around $217,700.

In Zimbabwe, particularly in Bulawayo, there are a number of channels that give the world a glimpse of the country’s cultural hub.

One such channel, Magriza Made Me Cook, run by Prince Sivalo Mahlangu, aims to show the various traditional cuisines of Zimbabwe.

Mr Mahlangu said the channel, which has more than 8,000 subscribers, was inspired by his grandmother’s immense knowledge in preparing traditional dishes.

“My YouTube channel is called Magriza Made Me Cook and its main focus is documenting the diverse food cultures of Africa, one dish at a time.

Based on this, the show also seeks to capture different cultural knowledge systems that are used in keeping with African food, stories, music to name a few.

The channel also broadcasts content on places to visit and travel in Zimbabwe,” Mr Mahlangu said.

“The creation of the channel was driven by my grandmother, who is the inspiration behind the channel. Seeing the wealth of knowledge she inspired me to tell her story and that of others doing influential work in the society.

Another reason is based on the need for us as Africans to tell our own stories and own our stories.

He said it had been difficult to grow an audience, grow the channel and make money from it.

“Even though YouTube is a great platform, it has its own challenges. Countless videos are uploaded to the search engine, which makes it very competitive.

To cut it all down, the quality issues in the production were the main challenge, because starting out on YouTube was also the start of my career as a filmmaker.

“Increasing the channel’s audience is an enriching experience. The growth of the channel is based on our belief as a team to try by all means to be consistent with the content offered to viewers.

Another YouTuber, Mr. Langa Ndimande runs an eponymous channel and said he started his channel in 2020 at Midlands State University (MSU).

“It was a long dream for me, besides I was very bored. In my first videos, I was interviewing students at MSU where I was a student. I thought if someone was going to watch YouTube, that would be university students,” Ndimande said.

He said that at first the commitment was low and that almost led him to give up.

“People weren’t watching and I was getting very low engagement, and the content wasn’t that funny at first. It wasn’t until April of that year when we went into lockdown that I decided to really focus on content creation.

Also being from Bulawayo, there are not many content creators, I only knew Bulawayo Memes and Nceku.

So I felt we weren’t represented enough, and people were still watching South African content or American guys or even Harare guys,” Mr Ndimande said.

He said he changed tack and started doing interviews all over town and got a good response.

“So around June with my friend Mqhele we went around town asking people how many people they had slept with and it was the video that really caught my attention because the video got 2,000 views in less than 24 hours.

For me it was crazy and being from Bulawayo it seemed impossible at the time. That’s when I realized that people just want to laugh.

So, I started making more of these videos on YouTube interviewing people from Bulawayo asking them different questions,” said Ndimande, whose channel has over 4,000 subscribers.

A YouTube channel called Byo_Tv is also popular and focuses on Zimbabweans, especially Bulawayo residents, and reminds them of the city.

The channel was born after the Instagram page, Byo memes gained audience and has nearly 120,000 followers.

The channel is run by Mr Mgcini Moyo, who said the first two videos were of him and Nigel Sikhosana, his co-host, walking around the city center.

“These videos were posted about a year ago. Also, the diaspora market that we were trying to bring to the YouTube channel was from the Byo memes Instagram page.

The logic was that we already had a significant number of followers on Instagram and most of the people who engaged at a high level in terms of comments and continually asked for more were people from the diaspora. So we decided to create a channel that caters to a market. we already have it,” Mr. Moyo said.

He said that after two videos, they then decided to keep entertaining people, but stopped using nostalgia and did sit-down videos instead.

“This content allowed us to venture into more than just reminding people of their beloved city. After a few sit-down videos, we then started posting Mjolo FM’s best moments on the YouTube channel.

Mjolo FM is described as an exhilarating dating game show format on Instagram live as single women and men try to find a love match.

He said they had teething problems when they started.

Depending on the size of the video being posted, posting a video to YouTube usually requires a significant amount of data, especially with podcasting these days.

Another problem is the camera equipment. One of the reasons we resorted to posting highlights from Mjolo FM was that it was getting difficult to deliver content,” Mr. Moyo said.

He said he was not working alone as the channel was a team effort with Qhelani Moyo, Jahalezansi Sibanda, Melisa Jane Hlomani, Mayibongweinkosi Khumalo and Eric Khumalo.

Mr Moyo said the process of growing the channel to over 3,000 subscribers was also a challenge.

“We tried to keep it as organic as possible. We already have a large following on Instagram, but we still needed to convince people why they should continue to engage without content on YouTube.

However, in doing so, it was important to ensure that the process was organic.

By this I mean we avoided subscriber buying or such unscrupulous trends because YouTube channel engagement is as important as the number of subscribers.

Having highly engaging followers helps form the next content idea because comments are where our market connects with us.

He said they were making money from the channel, but it was a very small amount.

“The channel is monetized and we have started making money from Google AdSense, so if you watch our content and the ad appears, you can make money for us by watching the ad,” said M. Moyo.