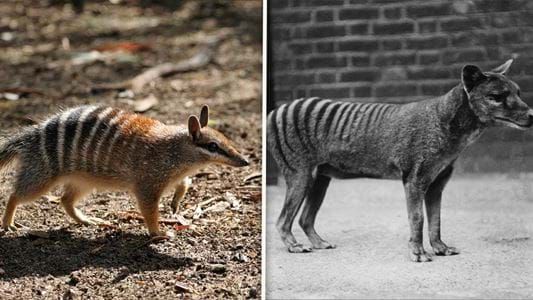 The closest known relative of Tasmanian tigers could be the missing piece of the puzzle that brings the rare species back.

Australian scientists have mapped the genome of Numbat, which was also on the brink of extinction in the last century.

The Numbat species once roamed southern Australia, and there are now fewer than 1000 left in the wild.

Although considered an endangered species, Perth Zoo is the only known place to breed the Numbat in captivity.

the University of Western Australia (UWA) DNA Zoo were able to provide a blood sample that will help revive the Tassie tiger.

“The termite-eating numbat is one of the closest living relatives of the thylacine, sharing a common ancestor around 35 million years ago,” DNA Zoo Director and Associate Professor Parwinder Kaur noted.

“These two enigmatic creatures have stripes, but that’s not where the similarity ends – up to 95% of their DNA may be identical.”

The scientists also say the genome map will help better understand the evolution of Numbats, saving them for future generations.

Incidentally, the Numbat is the animal emblem of Western Australia.

“This wildlife needs to be understood and protected, and the partnership between Perth Zoo and Zoo DNA will help achieve this.”

Get the latest breaking news from SCA newsrooms across Australia. Short, simple and all you need to know.

To download LiSTNR and enjoy a new audio world. All your favorite shows and stations in one library.