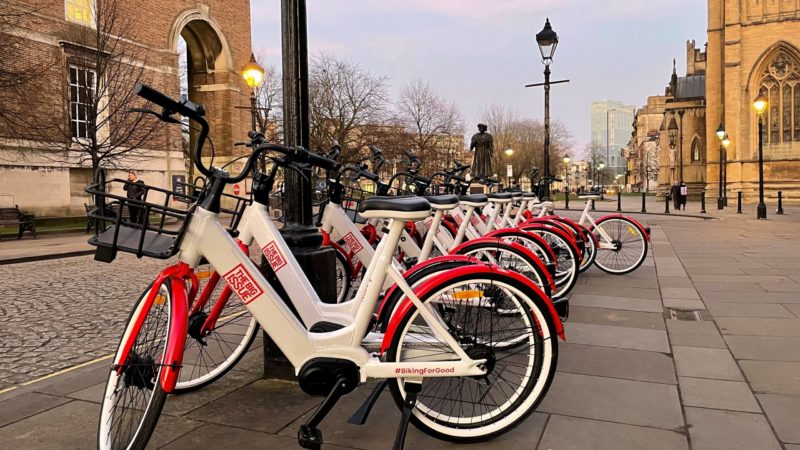 Three weeks after the launch of Bristol’s new e-bike program, concerns have been raised about the level of vandalism directed at the fleet.

Since hitting the streets of Bristol on February 1, the red and white bikes have become a familiar sight and a useful boost to climb our city’s notorious hills – but a minority of people spoil the fun.

Unfortunately, reports of deliberate vandalism forced the Norwegian company to reduce the limits of the bicycle parking areas.

Now the area where Big Issue e-bikes can be docked has been tightened, cyclists have reduced access in South Bristol, including Hengrove.

The limit of where bikes can be moored has been adjusted – image: Big Issue eBike app

A spokesperson for the project said: “As this is a new scheme, we are still adjusting the location of the e-bikes to ensure we have them in parts of the city where we are seeing the levels of demand. the highest.

“We launched with a relatively small fleet, so we want to make sure they’re not too spread out. That means we’ve reduced the park area boundaries in all the outer areas of the city.”

Another dockless bike rental program, YoBikes, launched in 2017, has also been plagued with issues such as theft and vandalism and the outlet was discontinued in March 2021.

This Bristol24/7 content is made possible through contributions from our members. In February and March, we are on a mission to reach 1,000 supporting members. Membership is £5 a month and allows us to continue our important work of bringing you the best stories in Bristol. If you enjoy reading our articles, consider supporting us and join us today.

The Big Issue eBike scheme, the first of its kind in the UK, is based on a ‘cycling for good’ model. It encouraged the recruitment and retraining of unemployed and vulnerable people to maintain the fleet at its Brislington depot.

A spokesperson added: “In the three weeks since the introduction of e-bikes to Bristol, we have been delighted with their uptake and the positive feedback we have received from Bristolians.

“However, we are disappointed with the level of vandalism we have seen. For every e-bike we have to take off the streets and replace, that means one less person per month we can support.

“We know that the majority of people look after our bikes and enjoy using them, so in order for us to be able to help as many people as possible, we ask everyone to keep an eye out and report any damaged bikes to us as as soon as you can.

The initiative is in its early stages, but CEO Jan Tore Endresen told Bristol24/7 his hope is to roll out more bikes in the city.

Endresen said: “Our ambition is to grow both locally and nationally. Our ambition here locally will be to grow the system – I think Bristol can easily have several thousand bikes at the moment.

Listen to the latest Bristol24/7 Behind the Headlines podcast: