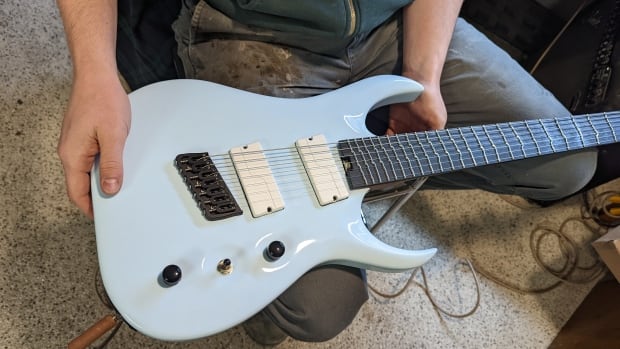 Trevor Woodland had a practical reason to take up bass guitar while he was a college student on Vancouver Island.

“They basically needed someone to play bass, and I was the only one tall enough to reach the first frets, because it’s a big instrument,” he said.

Inevitably, something on the bass would snap.

Growing up in the small hamlet of Black Creek, British Columbia, he didn’t want his mother to drive him to the nearby towns of Courtenay and Campbell River for repairs, so he took matters into his own hands.

“You usually make it worse on the first try,” he said of his early repair efforts. “But you solve that problem and you try again. You solve later problems that come up and you get really intimate with your instrument and you start to understand it.”

Guitar enthusiasts gather for the Victoria Guitar Show. Luthiers like Trevor Woodland will be there. Rohit Joseph caught up with him to find out how he got into building guitars and how beautiful instruments can be made sustainably. 9:22

Years of tinkering led Woodland to open Vigilant Guitars of Victoria, which specializes in building custom guitars using ethically sourced materials. As far as possible, he tries to use local materials.

“We have a lot of these woods that aren’t traditionally used in guitars, but can be used a lot, so just using some of the surrounding environment in that way can set you apart,” he said. he declares.

Woodland is also co-host of the Victoria Guitar Show, a free event that takes place Saturday at the Victoria Conference Center from 10 a.m. to 5 p.m. PT.

He says he looks forward to meeting other luthiers to talk shop, a welcome respite from what can be a solitary vocation.

“I sit in this room some days and you don’t look out too much because you have your head down on the bench,” he said.

Woodland says he considers himself a science- and engineering-driven craftsman of guitar making, but he can’t help but get poetic on occasion about the instrument’s enduring appeal.

Woodland says his guitars are built to last and he hopes they will be passed down from generation to generation.

“It’s pretty cool to think that some of the guitars I’m making right now, or maybe in the next couple of years, will have a great life, but they could become an integral part of someone’s life that I will never meet. because they are 100 years in the future.”