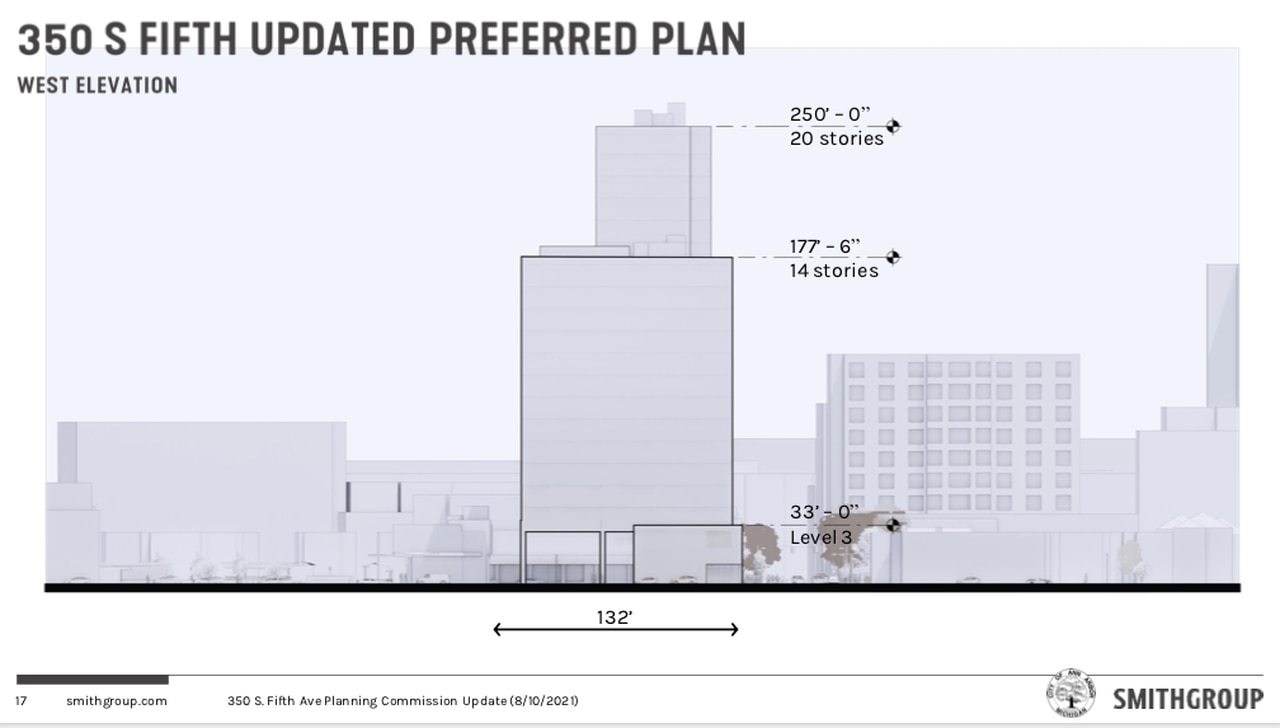 ANN ARBOR, MI — A 20-story development next to the Blake Transit Center is headed to City Council for approval.

The planning commission voted unanimously to recommend approval of the project by the city council.

“We look forward to this moving forward and coming to fruition,” Commission Chair Sarah Mills said.

Plans call for two towers of 14 and 20 floors, with 370 housing units, including 145 dedicated to affordable housing for people earning up to 60% of the region’s median income.

The proposed regulations would require both towers to be all-electric buildings, in line with the city’s A2Zero carbon neutrality goals and green building standards.

“I’m very happy to see this in terms of progress in the city and this project in general in terms of many of our goals,” Commissioner Lisa Sauve said.

32 Ann Arbor developments to watch in 2022, including new downtown high-rises

The tallest tower is said to rise nearly 250 feet, making it one of the tallest buildings in the city. Although this is what is stated in the initial concept plan, the proposed PUD regulations would allow a maximum height of 275 feet and ultimately either building could reach that height as long as it remains within the floor area ratio limits, planning officials said, noting that there is a 900% FAR limit and what is being considered is already at 867% FAR.

While 145 affordable units are envisioned between the two buildings, the proposed by-law only requires 100, provided that at least 40% of all units built are affordable. In the mixed-income tower alone, 20% of the units are expected to be affordable, although this requirement may be met through payments to the city’s affordable housing fund instead of building the units.

The Housing Commission is expected to team up with a yet-to-be-chosen private developer to bring the project to fruition, while tapping into the city’s new affordable housing mileage fund.

The site, known as the Y Lot, was home to the Ann Arbor YMCA from 1960 until 2005, when it moved to Washington Street. The old YMCA building was demolished in 2008, including 100 affordable housing units associated with it.

Since then, the city has been talking about building new affordable housing on the site.

As well as a mix of affordable and market-priced housing, plans also show active ground floor uses along William Street and suggest there could be nearly 5,700 square feet of retail space and over 7,300 square feet of office space.

With a proposed new mid-block bus lane on the north side of the site with room for four Ann Arbor Area Transportation Authority bus bays, the ground floor would accommodate expanded transit operations, as well than a building service road.

The project is expected to be developed in coordination with the Downtown Development Authority and improvements along the streets and sidewalks surrounding the lot.

Planning commissioners were concerned that planning by-laws did not require street trees along Fourth and Fifth Avenues. Planning director Brett Lenart said only three street trees would normally be required by code and he suggested the commission could change the bylaw to require at least one, which the commission did, while still explicitly stating that there could be no driveway for the development of William Street. where a protected two-way cycle path faces the site.